Hajar Raissouni tied the knot with her fiance over the weekend, and Morocco’s former head of government attended the ceremony.

The newlyweds tied the knot in the presence of family, friends, and Morocco’s former Head of Government Abdelilah Benkirane. Benkirane served as prime minister of Morocco from November 2011 to March 2017.

The wedding comes just weeks after Raissouni and her now-husband received a royal pardon from King Mohammed VI.

Moroccan police arrested Raissouni and Al Amine in August at the entrance of a clinic monitored for practicing illegal abortion.

The Moroccan law criminalizes abortion when is not practiced to preserve the mother’s physical health.

Sex outside of marriage is also a crime in Morocco, according to Article 16 of the Family Code.

Both Raissouni and her fiance denied abortion claims, but the Al Akhbar al Yaoum journalist received a one-year prison sentence from the Rabat court for undergoing an illegal abortion and sex outside marriage. Her fiance received the same sentence.

King Mohammed VI granted a royal pardon to Raissouni and her fiance on October 16. The royal pardon also included the doctor and medical staff arrested for performing the alleged abortion. 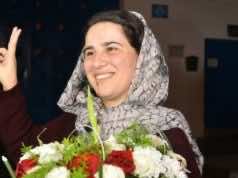