The Mohammed VI Tower and Rabat Ville train station extension projects are a source of concern for UNESCO.

Rabat – UNESCO sent a letter to the Moroccan government expressing their “great regret” at not receiving details about the ongoing urban development projects in Rabat in July 2019, reported Spanish news agency EFE this week.

In 2012, UNESCO designated Rabat as a World Heritage Site for its historic features and the remnants of different civilizations in the city. UNESCO’s acknowledgment, however, requires local authorities to communicate in advance any large urban projects that could modify the city’s architecture.

The Spanish outlet explains that the Moroccan government did not send any correspondence to the UN organization before launching construction work on the projects.

UNESCO also warned the Moroccan government that they have until February 2020 to carry out an “impact study” on the projects, with an emphasis on the visual and landscape changes that will come with them.

For UNESCO, the two most problematic projects are the Mohammed VI Tower and the extension of the Rabat Ville train station.

The Mohammed VI Tower, expected to open in 2022, will be the highest tower in Africa, sitting at 250 meters with 45 floors. It will rise in the estuary of the Bouregreg River, where the tallest buildings only have three floors.

UNESCO objects to the “potentially negative visual impact that the tower project could have” on the Bouregreg valley.

The contractor undertaking the building of the tower has already started construction. The tower foundations are already in place and the entire base is finished; its rise is only a matter of months, according to one of its architects, Rafael de la Hoz.

Moroccan authorities may defend their case by confirming that the tower will rise outside of the protected heritage zone, marked by the Bouregreg River.

The second project that attracted UNESCO’s negative remarks is the building of a commercial center on top of the almost-one-century-old Rabat Ville train station. French colonizers built the station in 1923.

Rabat Ville is known for being small and discreet, with tracks going underground. Both the station and its neighboring avenues have maintained the same building style since the early 1900s.

However, the ongoing renovation and extension projects include a large commercial center made of glass and steel on top of the historical station, near the Almohad wall that was built in the 12th century.

UNESCO expressed its “regret that [the government] has not been able to make minor modifications in the project of the station to mitigate its impact on the city walls.” 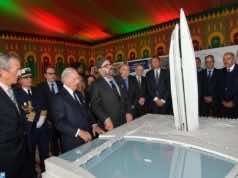 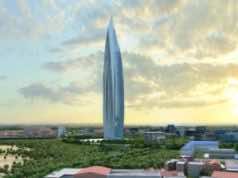 BESIX to Start Construction on Africa’s Tallest Building in Morocco