Months ahead of the Crans Montana Forum in Dakhla, the event’s founding president commented on Morocco’s development model and efforts in the southern provinces. Rabat – Jean Paul Carteron, the founding president of the Crans Montana Forum, has hailed Morocco’s recent reforms and development projects, particularly acknowledging the North African kingdom’s efforts in Western Sahara and the economic “miracle” it has operated there.

In a statement to Maghreb Arab Press (MAP), the Swiss businessman said Morocco’s recent reforms have made it possible for the country to attract global and continental interests, successfully branding itself as a reliable and serious partner in dialogue on regional and worldwide issues.

In addition to becoming a prominent and assertive voice in Africa, Carteron stressed, Morocco is also emerging as an example of a “success story” for other African countries to emulate.

“In a continent where hope has often seemed to have deserted, where populations still suffer, where States have difficulty taking advantage of their extraordinary natural resources, Morocco has demonstrated a spectacular success story that has become an example for all its sister countries, and the effectiveness of good governance,” he said.

To illustrate his praise of Morocco’s “success story” and growing “African responsibility,” he provided a list of the country’s recent development projects and political reforms. He cited the kingdom’s high speed train, its burgeoning aeronautical and automotive sectors, as well as its increasing financial and political influence across Africa. “[Morocco] is today an engine of growth,” he emphasized.

In recent years, the regions of Dakhla and Laayoune in Western Sahara took the lion’s share of Morocco’s public investment, with the kingdom boldly expressing its desire to accelerate the region’s socio-economic integration with the rest of Morocco and transform it into a regional investment hub. Commenting on the transformations witnessed in the region, Carteron said that the efforts “testify to the success of policies implemented by Morocco.”

The statement comes months ahead of the Crans Montana Forum.

Relocated to Dakhla since 2015, the forum styles itself as “Africa’s Davos,” annually bringing together thousands of business leaders, civil society organizations, and political leaders from around the world to discuss themes relevant to investments and governance in Africa.

This is not the first time that Carteron has praised both Morocco’s new development model and its enormous public investments efforts in the southern provinces. “Morocco builds in Dakhla the very example of the African miracle,” Carteron said earlier this year at the opening ceremony of the 2019 Crans Montana Forum. 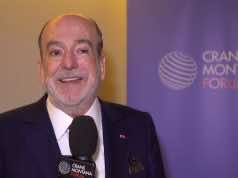