Greenpeace: “Moroccan oases are endangered and me must act quickly to rescue them!”

By
Caley Koch
-
Originally from Washington DC, Caley is an aspiring writer and editor who is currently attending DePaul University in Chicago for her Bachelor’s degree in creative writing.
Dec 12, 2019
Spread the love

Rabat – On Wednesday, December 11, in Casablanca, Greenpeace released a documentary concerning the endangerment of Moroccan Oases.

Since one of the responsibilities of Greenpeace campaigns is to shed light on the impact of climate change in the MENA region, the organization released a short documentary on the challenges that women living in oases face due to the consequences of climate change.

The documentary is accompanied by a petition entitled “Protect Moroccan oases,” calling for the protection of these endangered areas by acting quickly, providing a voice, and demanding a transition to renewable energies.

The oases are absolutely necessary for life in the desert and are characterized by their biological diversity, inhabitants, and culture, says Greenpeace.

However, they are endangered because of the considerable impact that high temperatures have on water resources. As a result, agricultural and livestock activities have declined, causing the displacement of indigenous populations.

According to a report conducted by Dr. Mohamed Madani named “The impact of climate change on Arab countries,” the frequency of droughts has increased in the last 20 to 40 years in Tunisia, Morocco, Syria, and Algeria. The annual frequency in Morocco has increased from once every five years to once every two years.

With fossil fuels being the main source of electricity generation, the Earth, and therefore the oases, have increased in temperature, says Greenpeace. “We are witnessing fundamental changes in their ecosystems,” said Julien Jreissati, campaign manager for Greenpeace Middle East and North Africa.

He continued: “What the Moroccan oases are undergoing exemplifies the impact of climate change around the world; the complete disappearance of civilizations, their peoples, and the loss of natural environment.”

The Morrocan Minister of Agriculture, Maritime Fisheries and the director of Rural Development of Water and Forests, Aziz Akkhanouch said in a statement: “Nearly two-thirds of oasis habitats in Morocco have disappeared in the last century. This process has accelerated in recent decades due to the considerable increase in temperatures.”

Communities living in the drylands and oases of developing countries are among the most threatened by the impacts of climate change. Greenpeace emphasizes that the disappearance of oases affects Morocco and all of the other countries in North Africa that are encompassed by dry deserts such as Tunisia, Libya, and Algeria

During its campaign, Greenpeace addressed a petition to the leaders of the Moroccan government, reminding them that they play a pivotal role in acting on global climate negotiations and forums.

Greenpeace concludes that they must “strengthen their commitments to fight the effects of climate change for the defense of Moroccan culture, wealth, and heritage.” 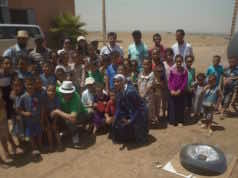 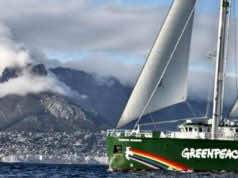 ‘Rainbow Warrior’ Ship of Greenpeace to Put in at Tangiers on Oct.28