The new president of Algeria is a Bouteflika-era former PM, who was sacked for criticizing the Mouradia palace (residence of the President) and its policies.

Tebboune won the election with a majority of 58% of the vote, meaning that there will be no second round of the election.

The electoral body announced that turnout was very low with only 40% this year.

Deposed Algerian President Abdelaziz Bouteflika sacked Tebboune as prime minister in 2017, only three months after he was appointed.

Bouteflika sacked Tebboune for his alleged public criticism of the Algerian presidency.

Political observers predicted  Tebboune’s win as he is backed by the army. The army, however, vowed to not interfere in the election.

The election took place in a tense climate, with Algerian protesters strongly criticizing the army for imposing the ballots at a critical time.

Protesters have been rallying in Algeria since February after the former president announced his decision to run for a fifth term. The decision did not go unnoticed, with thousands of Algerians calling for his departure along with the elites of his regime.

The protests resulted in his resignation, with several other officials following. The protests continued with people calling for the interim government as well as the army chief Gaid Salah to step down from power.

Masses of voters in Algeria also boycotted the presidential election, with clashes erupting between demonstrators and the security services.

After Bouteflika’s resignation, the military tried to regain control of the population and pushed for a presidential election to resolve the political crisis.

Ahmed Gaid Salah, Algeria’s army chief and de facto ruler, said that opponents of the elections are “a criminal gang full of bitterness and visceral hate for this country.” He also ordered security forces to stop any disturbances of the elections.

Despite calls for reforms and radical change, a Bouteflika-era official won the election. It remains to be seen whether protesters will accept Tebboune’s election or will continue their calls for new faces in government. 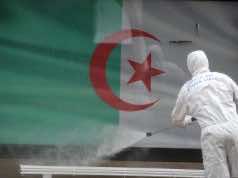