Rabat –  Renowned DJ and musician David Guetta amazed his Moroccan followers with a photo, posing next to the Yves Saint Laurent Museum in the popular city of Marrakech.

Guetta seems to be enjoying a winter trip during Christmas time in the redwashed city.

Wearing a simple jacket and a pair of jeans, the musician posted a photo on his Instagram looking at the YSL sign in the front of the museum in Marrakech.

David Guetta has tens of thousands of fans in Morocco, who attended his concert at the 2019 Mawazine Festival in June on the international stage of OLM Souissi in Rabat.

The DJ amazed his fans with his best hits, including Titanium. The audience interacted with love and passion with his music throughout the festival.

At one point, the DJ expressed his love to his fans with a “love” sign with his hands.

Following the concert, the DJ shared a photo capturing his “love” gesture, with a caption saying “Morocco, I [love] you.”

The DJ is also a music programmer, record producer, and songwriter. According to the musician official website, David Guetta will perform at the MDL Beast Festival in Riyadh, Saudi Arabia on December 20. 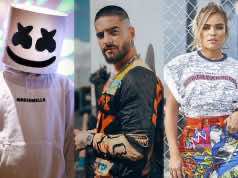