When it comes to certain physical activities like hiking, Moroccan girls and women are still afraid to do them because of stereotypes and prejudice in Moroccan society. By
Wafa Fouali
-
Wafa Fouali is an English language teacher in El Kelaa de Sraghna who loves to exercise.
Dec 21, 2019
Spread the love

Rabat – Hiking Morocco’s peaks, however, became an important part of exercising my own independence as a Moroccan woman.

My journey to hiking mountains faced an added obstacle because I was born two months premature and have lowered immunity. Since I could not play as other kids do, I became dependent on my brother Hicham. Unwilling to play, jump, or do any sports activities, I naturally abhorred physical education during my schooling.

After graduation, I gained self-confidence through engaging in community services, but exercise also became important to me. I started to go running regularly and loved it. I discovered my passion in climbing mountains and challenged myself to reach some of the most famous summits in Morocco. I climbed Moussa mountain in the north of Morocco last summer and hiked all over Khenifra and Beni Mellal in central Morocco’s Atlas Mountains.

For three years, I have dreamt of climbing a mountain in Azilal, central Morocco, known as Imsfrane to locals and the “cathedral” to foreigners.

Earlier this month, I proved to myself I could be truly independent when I finally climbed it. I went with friends and took charge of the planning and organizing accommodation in the village.

The trip seemed doomed from before it began. I was in panic over the fact that the weather is freezing there, but I was also determined. We took the bus from El Kelaa des Sraghna, and my beautiful female friends were eager to begin this exciting experience. I could not take their company for granted. Because of stereotypes and prejudice in Moroccan society, parents believe that girls should not engage in this kind of sports, especially girls wearing the hijab veil. They think that girls cannot go on trips and be backpackers.

With our hike up Imsfrane, I hoped to break the norms in my society.

But we were still worried about the freezing weather, anxiously checking the weather on the internet. We arrived at Beni Mellal, and the weather was indeed freezing and the sky still dark.

On the road to Ouawizeght village, though, our spirits stayed high as we chatted with the taxi driver. Mr. Mostapha was really taken with one of my friends and wanted his son to marry her. He spoke with enormously exaggerated words and emotions in an attempt to convince her of the marriage. In Ouawizght village, we ate “bissara,” a well-known winter dish Moroccans eat to keep warm. After breakfast, we took another taxi to our destination: Imsfrane. The friendly taxi driver talked about the region’s geography and history as if he was narrating a documentary.

Our trip continued to improve as we were delighted at the base of the mountain with excellent staff service, food, and cleaning.

That night, we built a fire and had the chance to meet new friends who helped us light the fire. As we gathered around, our new friends, experienced hikers, told us more about the sport. They promised to climb Imsfrane with us until the summit.

When morning came, I knew my dream of climbing Imsfrane was getting closer to coming true. The temperature was -2 degrees as we met our new friends and started to climb the mountain. Confusion and a mild panic set my heart pounding when I noticed my breathing was slow and it caused a pain in my chest. I dug deep and started to motivate myself, saying, “You can do it! Yes, I can. I will make it today.”

The next challenge came when one friend wanted to quit. Luckily, some boys helped and motivated her.

Unexpectedly, I was soon hiking alone, with some of my group ahead of me and some behind. I did not have my backpack; I was alone without water or food for energy. Being alone on the mountain, however, brought out my courage. I had learned to depend on myself and to pay attention to the signs on the road. I reached the summit after two hours and one minute of hiking. I shouted joyfully as I had never done before. I took photos with the first group, who had reached the summit before me. We began to descend and met the other group. My friend Fatima Zahra insisted I return to the summit and take pictures with her.

I found the porter who had carried my backpack and hungrily started to eat and drink a lot of water. Fatima Zahra and I began to write mountaintop dedications to our friends and took pictures for them. The porters got angry, not believing they had carried stationary, markers, and a second set of clothes for me all the way up the mountain. They surrendered to this funny situation, and ultimately they even helped in writing the dedication.

I had made it to the top of Imsfrane. Not only did I overcome stereotypes that women should not engage in activities like hiking, I had overcome my physical weakness, too. 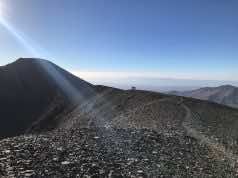