The new committee for a Moroccan development model includes six Moroccans from the diaspora who could revolutionize the process.

We can only be optimistic about the announcement of the members on Morocco’s new development model committee, released on December 12, 2019. Moroccan Ambassador to France Chakib Benmoussa will lead the committee after being appointed on November 19.

After King Mohammed VI outlined the need for a new development model in his 2019 Throne Day speech and again in the King and People’s Revolution speech on August 20, Moroccans noticed a significant increase in public debate among civil society, political parties, intellectuals, and the Moroccan diaspora, even before the announcement of the list and the appointment of the president.

This movement is an essential indication of the importance of the involvement of everyone in building Morocco’s future, where territorial justice and social development is concerned.

The reason for our optimism is that the list followed the directives of the royal speeches to include a new generation, a new mentality, and a Moroccan-Moroccan model, while defining the committee’s work.

It is difficult to form a committee of 35 competent Moroccans who will voluntarily work on a new development model. They have to answer the aspirations of the younger generations and use the knowledge gained from experience.

The committee will dissolve after presenting the new development model to King Mohammed VI before June 2020.

The 2019 speech on Throne Day was the reason behind the launch of the committee. The 2019 speech of the King and People’s Revolution considered the new development model as an excellent gateway towards the future.

The new development model committee’s list includes six members of the Moroccan diaspora, who will be able to participate in Moroccan public affairs and making its future.

The diaspora Moroccans on the committee is an expression of the King’s keenness to integrate them into promising national development projects.

Moroccans abroad are an essential part of the committee as indisputably competent in their various fields. This will add value to the committee’s work.

Our optimism is based on the criteria of including a new generation with new mindsets and adopting competencies set by the 2019 speeches of the Throne and the King and People’s Revolution. The six international Moroccans who are part of the committee all embody these criteria, which highlights diversity, pluralism, competence, and youth.

They are also mostly young people with linguistic and cultural plurality.

Most of diaspora Moroccans on the committee are multilingual and have a multiplicity of experiences in their countries of residence, from English influence to Francophone experiences, and other European and international influences, in addition to their homeland languages, such as Arabic, Amazigh (Berber), and others.

Many of the international Moroccans are also writers.

The six have also maintained ties with Morocco even before their appointment to the committee. Abraham Zawi, for example, received a royal decoration in 2014, and Rachid Benzine has been a member of the Council of the Moroccan Community Living Abroad (CCME) since 2016.

These members will provide the committee with a Moroccan-Moroccan standard. But they will also present experiences from other countries, especially since all six members occupy senior positions in their fields of work.

For example, Ahmed Bounfour is an international expert in the management of intangible capital and works with the Organization for Economic Cooperation and Development (OECD) as a visiting professor.

As for Rachid Guerraoui, he works at the College de France, an old institution established in the 16th century that specializes in scientific research and education.

Guerraoui also works in Silicon Valley, California, where major technology and software companies, such as Google, Apple, Yahoo, and eBay, have their headquarters. The importance of Silicon Valley led the country of Denmark to appoint a “digital ambassador” in it.

Narjis Hilale is a university professor in Geneva and an expert in artificial intelligence and women’s empowerment.

For Abraham Zawi, it is enough to mention that he was vice president of the American financial institution Morgan Stanley.

Fouad Laroui teaches humanities at the University of Amsterdam and is an engineer with a Ph.D. in economics.

We believe, in all honesty, that the contributions of diaspora Moroccans in preparing the new development model will be decisive as they represent a new generation and have new mindsets.

They grew up abroad but remained faithful to their Moroccan identity and have maintained their links to both Morocco and their countries of residence. 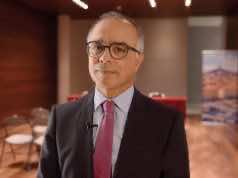