Salah served as a de facto leader of Algeria during the protests which started in February 2019 and led to the resignation of former President Abdelaziz Bouteflika.

Rabat – The powerful army chief of Algeria General Ahmed Gaid Salah has died today, December 23 at the age of 79.

Reports said that Salah suffered a heart attack Monday morning, December 23. He was rushed to a hospital in Algiers, where he died.

The death of Salah comes as a shock in the political arena as he has been the de facto leader of Algeria during the continuous protests that began in February 2019.

Gaid Salah was born in 1940 in Batana, Algeria. The army chief has served in the Algerian military since 1958. He became the head of staff of Algeria’s People National Army in 2004.

The former head of Algeria’s army also began serving as the vice minister of defence in 2013.

Gaid Salah played a major role in the protests in Algeria that began when former President Abdelaziz Bouteflika announced his decision to run for a fifth term in the presidential election.

With the country’s leadership under pressure, Salah urged Bouteflika to resign. When Bouteflika resigned in April, Salah led the country until the appointment of an interim government.

Despite the appointment of an interim president, Gaid Salah was still seen as the main leader in the country, calling on protesters to end demonstrations.

Salah also led a purge of senior government officials in an effort to appease protesters after the resignation of Bouteflika.

He ordered the arrest of dozens of military officials and former senior government officials, such as Ahmed Ouyahia and Abdelmalek Sellal.  Both served as prime ministers.

An Algerian court sentenced Ouyahia to 15 years and Sellal to 12 years on December 10.

The government promoted Salah to general in 1990 and then to major-general in 1993. Algeria entrusted him with the command of the land forces in 1994.

Bouteflika insisted on keeping Salah in his government in 2004 when he replaced former chief of staff Mohamed Lamari. The former Algerian president forced Lamari to leave because Lamari opposed Bouteflika running for a second term.

Since then, Gaid Salah became the right-hand man and a loyal supporter of Bouteflika’s regime.

Gaid Salah gained more visibility in 2013 after Bouteflika had a stroke. When Bouteflika returned to Algiers after more than 80 days recovering in Paris, he appointed Salah as deputy defence minister.

Former President Abdelaziz Bouteflika’s absence from the public after his stroke led to Salah’s increasing power among political leaders in the country.

Gaid Salah backed each of Bouteflika’s decisions to run for president for his four terms. He also backed Bouteflika’s bid for a fifth term until the escalation of protests, which led Salah to ask for Bouteflika’s resignation. 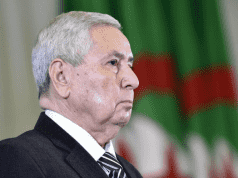