The plane crashed into a building after clearing the runway.

By
Susanna Spurgeon
-
Susanna is a former editor at Morocco World News.
Dec 27, 2019
Spread the love

Rabat – A Kazakh airplane crashed shortly after taking off from Almaty International Airport in Kazakhstan on Friday morning, December 27. The airplane struck a building in the village of Almerek, just beyond the end of the runway, ABC News reports.

The airplane carried 93 passengers and five crew, according to Kazakh authorities. So far, reports suggest 14 or 15 people died in the airplane crash, and more than 20 are seriously injured. Five children and three infants were aboard the plane.

A statement from the Kazakhstan Civil Aviation Committee explained that the Bek airplane “lost altitude during takeoff and broke through a concrete fence” before hitting a building.

The plane, a Fokker 100 operated by Bek Air, was en route from Almaty in southern Kazakhstan to the capital city, Nur-Sultan.

One passenger told Kazakh news outlet Tengrinews that before the airplane crash, “The plane was flying with a tilt. Everything was like in a movie: screaming, shouting, people crying.”

Another passenger described a calmer situation, saying that while the airplane had been shaking during take-off, it felt like the plane had landed rather than crashed. “There wasn’t much chaos on board,” she said.

All Fokker 100 airplanes are at least 20 years old, because the company that made the Dutch plane went out of business and stopped manufacturing them in 1997.

Bek Air describes its Fokker 100s as “a very reliable type of aircraft that meets all safety standards.” 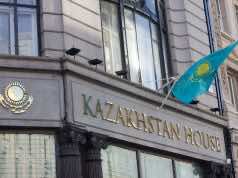 Kazakhstan to Open Embassy in Rabat