Morocco’s security services seized 179,657 tons of cannabis and its derivatives in 2019.

The police also arrested a 35-year old Moroccan national who was driving a transport truck registered in Morocco, according to a statement from the General Directorate of National Security (DGSN).

The police found large quantities of drugs concealed in wooden crates on board a trailer connected to the transport truck.

Police put the driver in custody for further investigation. The police also opened an inquiry in order to arrest all accomplices involved in the drug trafficking attempt and to determine its possible ramifications in Morocco and Europe.

The operation is part of Morocco’s efforts to stamp out drug trafficking attempts across the country.

Morocco’s security services managed to seize 179,657 tons of cannabis and its derivatives throughout the year. The number represents an increase of 125 tons compared to 2018.

In addition to cannabis, law enforcement also seized harder drugs, including 542,455 kilograms of cocaine, 7,196 kilograms of heroin, and 1,407, 451 psychotropic tables, including 974,983 ecstasy tablets imported from Europe. 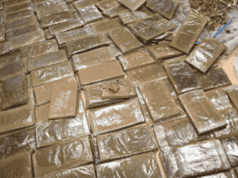