The new statement from Ivanka comes less than a month after Morocco’s decision to enact a draft decree that protects the rights of female landowners, known as Soulaliyates.

Rabat – Ivanka Trump, daughter and advisor to US President Donald Trump, has again congratulated Morocco’s government for the steps it has taken to protect the rights of female landowners.

She remarked on Morocco’s decision to “legally formalize” major reforms related to female landowners, or Soulaliyates.

“Congratulations to the Moroccan government and its citizens!” Ivanka Trump added.

The congratulations caption was accompanied with a snap of Ivanka with female landowners taken during her trip to Morocco in November 2019.

The post comes less than a month after Morocco’s government council approved draft decree N 2.19.973 to implement the provisions of Law 62.17 on administrative supervision over Soulaliyate communities and the management of their property.

The draft decree includes a series of regulatory measures that protect the rights of female landowners and their access to their communal lands.

Soulaliyate women or female landowners have been campaigning for years to claim their right to compensation from the sale or rent of collective land to private groups.

The women were demanding the same rights as men.

Morocco’s government responded to the women’s demands favorably, an action that received recognition from the US advisor.

In November 2019, Ivanka flew to Morocco as part of the Women’s Global Development and Prosperity Initiative (W-GDP) to promote female empowerment in the country.

W-GDP’s aim is to reach 50 million women in the developing world by 2025 through US government activities, private-public partnerships, and a new, innovative fund, according to the White House.

Ivanka met with senior officials as well as female farmers.

Ahead of her trip in Morocco, Ivanka thanked Morocco for its efforts to ensure equality between men and women in the country in terms of inheritance.

In August 2019 Ivanka wrote that the US applauds the “Moroccan government for this important step towards the adoption of inheritance law amendments, and look forward to supporting their full implementation.”. 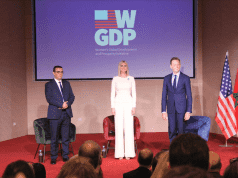