Marrakech closed out the decade by continuing to uphold its place as Morocco’s primary tourist destination.

By
Susanna Spurgeon
-
Susanna is a former editor at Morocco World News.
Jan 17, 2020
Spread the love

Marrakech’s 2019 figures were up 8% from 2018 as Morocco’s ochre city continues to attract tourists from across the world.

Increased tourism in 2019 came after 2018 had already been a big year for tourism in Marrakech. Overnight stays at “classified” hotels and other accommodations increased by 15% from 2017 to 2018, with just over 8.5 million overnight stays. The figure marks the biggest year-on-year increase of any city in Morocco in 2018, the most recent full year of tourism statistics that the Ministry of Tourism has reported.

Marrakech remains the primary destination for tourists in Morocco, with the coastal city of Agadir coming second. Sixty percent of all overnight tourist stays in Morocco were in either Marrakech or Agadir in 2018.

In the first half of 2019, Marrakech noted an increase in accommodation occupancy rates to 63% from 58% in the same period in 2018, a boon for the city’s tourism industry.

Marrakech was one of only two cities in Africa, along with Cape Town, to land on the list of the top 50 beautiful cities in the world by the Canadian online travel company Flight Network. Perhaps part of the city’s charm is its relative affordability compared to nearby European destinations. Last year, the British company Starling highlighted Marrakech as one of the world’s most affordable travel destinations.

The ochre city welcomed many notable international guests in 2019, including Bill and Hillary Clinton, who visited in September. Hollywood actresses Jessica Alba and Lupita Nyong’o also visited Marrakech in April for a Dior fashion show. British actor Idris Elba even chose Marrakech as his wedding venue. 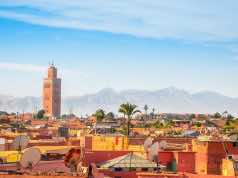