Morocco was the first country in the region which supported the February 27th revolution against Moammar Gadhafi’s regime in 2011.

Skoura – The armed conflict between the internationally-recognized Libyan government and the Libyan National Army (LNA) has grown increasingly complicated. Unlike many Arab and Western governments, Morocco has maintained neutrality in the conflict and offers a unique perspective.

Other countries and world powers, like the US and the UK, are oscillating in their attitudes or support due to the transformations of the conflict.

In the last year, Khalifa Haftar’s moves have led to a new geopolitical configuration of the dispute. In April 2019, he ordered the LNA to conduct a “decisive battle” to capture and liberate the capital, Tripoli, from the hands of “terrorist groups.”

The Turkish Parliament recently passed a bill allowing its government to deploy troops to intervene in Libya, after a Turkish-Libyan maritime border delineation deal.

Turkey’s actions prompted Germany to hold an international conference to find a political way out of the conflict in Libya.

What is Morocco’s perspective and role in light of the new regional landscape? Morocco played an important role in the Skhirat Agreement, signed on December 17, 2015, which is still the basis of the political process in Libya.

How Morocco views the Libyan conflict

Five factors explain Morocco’s perspective. First, Morocco’s role is based on neutral mediation between opposing parties without any ideological tendency or military ambitions. This behavior was even a matter of praise from the UN in its Resolution 2259.

Morocco insists on the credibility of its foreign policy and its willingness to redirect and rebuild relations with a new Libyan government after decades of tensions with Gadhafi’s regime.

Read also: After Berlin Conference Morocco Must Act to Restore its Role in Libya

Second, the Moroccan point of view prioritizes a political solution to the crisis. In light of the recent developments in the conflict and the rise of new regional and international players, no political consensus appears on the horizon.

Even the Berlin conference lacked a clear agenda. The ceasefire Turkey and Russia proposed on January 12, 2020, remains vulnerable, and Haftar rejected the proposition.

Third, Morocco does not welcome the rise of Algeria as a key player in the issue. Algeria received an invitation from German Chancellor Angela Merkel to attend the Berlin meeting when Morocco did not. Morocco is in competition with Algeria because Algeria seeks to revive its regional hegemony, and Libya is a very good opportunity.

The Libyan issue also represents the first foreign crisis task of the new President Abdelmajid Tebboune. Tebboune is making intense efforts to succeed in it and to reinforce the new political era after Algeria’s Hirak. It is not surprising then, that Algeria sees the Libyan conflict through the lens of its historical doctrine of regional hegemony.

Fourth, Morocco is worried about any foreign military intervention that could exacerbate the situation or threaten regional security. Any military step could further complicate the problem, and Morocco prefers to resolve the conflict in a regional framework.

Fifth, the Libyan crisis appears to be growing more anarchical due to the increasing foreign interventions and a complicated interlacing of political and strategic contradictions and interests away from the real Libyan people’s interests. 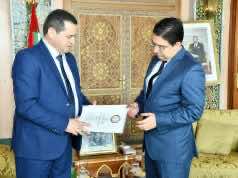 UN Envoy to Libya Resigns Due to ‘Stress’