The drivers maintain that it is impossible to know what is hidden inside the iron boxes or to inspect what is in the container.

Rabat – The Moroccan Intercontinental Road Transport Association (AMTRI Maroc) announced that it will stage a strike on Thursday to protest the recent arrest of 3 truck professional drivers and 3 assistants who were caught carrying a combined total of 27 tons of hashish at the Tangier Med port.

The General Directorate of National Security (DGSN), in coordination with the Customs services, arrested the suspects on July 8, 2019. Law enforcement officers found the Hachich hidden in iron boxes.

In a statement, AMTRI Maroc said that professional drivers have nothing to do with the charges against them, noting that it is also impossible for them to know what they are carrying in the containers or to see what is inside the closed iron boxes aboard their trucks.

The association called on the relevant authorities to deepen the investigation to reach out to the true owners of the illegal substances.

The association is also calling for the amendment of the “requirements of the Dahir of 1974, as well as the requirements of the Customs Code regarding the determination of responsibility, and the implementation of the chapters of the Penal Code Procedure related to judicial oversight and prosecution in a provisional release.”

AMTRI Maroc also announced that it would stage a second strike on Wednesday, February 12, along with other forms of protest to defend the legitimate rights of the arrested truck drivers. 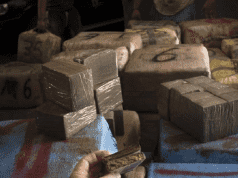