Morocco World News
Home Education The English Street School: A Classroom With No Roof and No Limits

Every week nearly 200 children and adults gather in a small side street in Essaouira’s medina to learn to speak English. They have no chairs, no pens, and no books; the will to learn is enough. 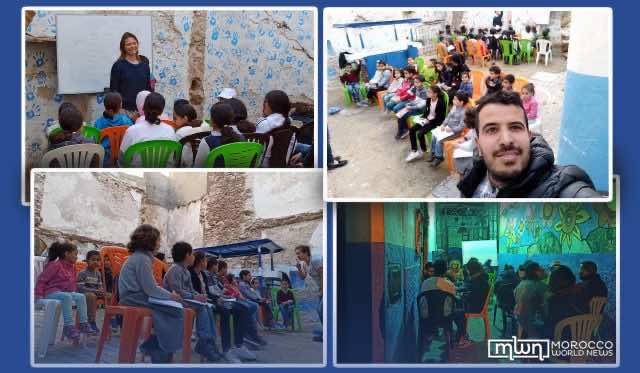 Moucine Camel became a teacher even before he finished primary school: “I used to put my friends in age groups on the house steps and teach them the alphabet.”

Full of energy, and almost childlike joy, Camel explained how he, as a primary school teacher from the coastal city of Safi ended up running a school in one of Essaouira medina’s narrow, hidden streets.

When I say in the street, I mean in the street. Camel’s school has no walls, no chairs, and no roof. He teaches anyone who wants to learn in a narrow alleyway protected only by the ancient walls of the medina (old city). “The street is the best school,” the young teacher said earnestly, before taking a sip of hot, frothy coffee.

“Children need to learn more than languages or science. They need confidence and self-esteem, that’s what we teach here.” 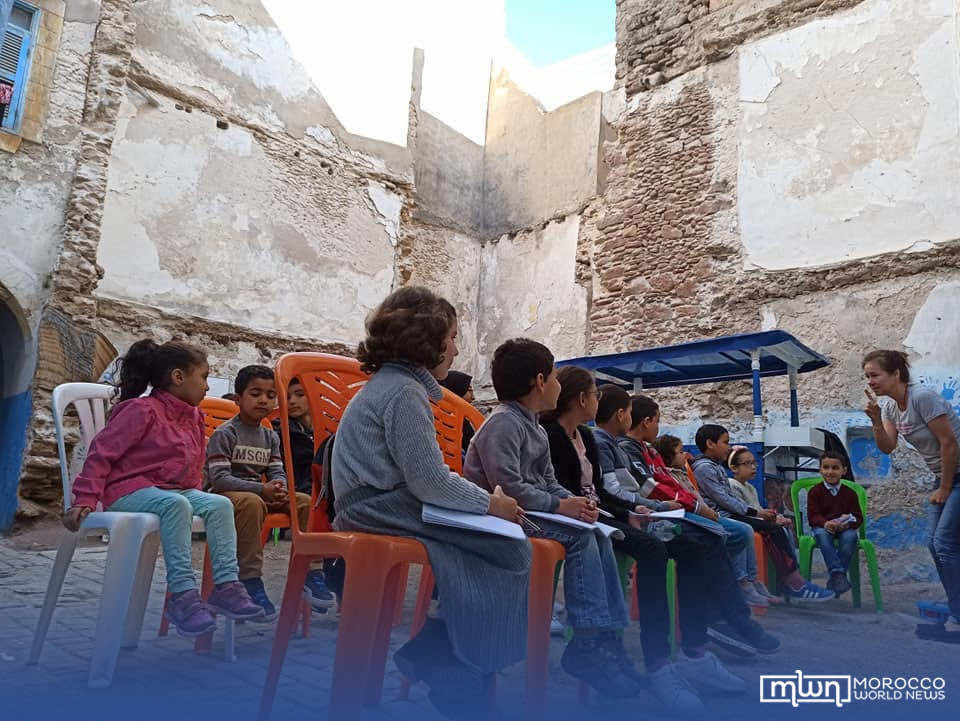 ‘It began with a failure’

“Everything happens for a reason,” Camel said confidently.

The first street lesson took place in 2017, “I remember it was just before the Gnaoua Festival, the streets and the hostels were packed,” he narrated. “I had organized a summer camp for kids and had four teachers from Spain coming to teach for free.”

Everything was ready to go, the teachers had their flights booked, the kids were ready to learn, and Camel was excited to see his dream come to fruition.

Then everything went wrong.

The camp where the summer classes were set to take place cancelled, leaving Camel with no venue, no students, and four teachers already on their way to Morocco.

“We had no contract, there was nothing I could do,” he said. “But I wasn’t going to give up.”

The inimitable Camel stalked the streets of Essaouira looking for a new venue, only to have every door closed in his face. Outside one door, however, he had an idea.

Camel had spent the summer of 2016 helping to redecorate the Harounia Association’s building, and outside the building was a small, partially covered alleyway. In the alleyway was an old blackboard used to put up notices. This, he thought, would make a perfect classroom.

Staff at the Harounia Association were only too happy to help and encouraged the children they work with to attend the first lesson. So, a day later, the volunteer teachers and a group of excited children embarked on the first lesson of the English Street Class.

“The children brought plastic chairs and sat in the street. They were waiting even before the teachers arrived,” he reminisced. 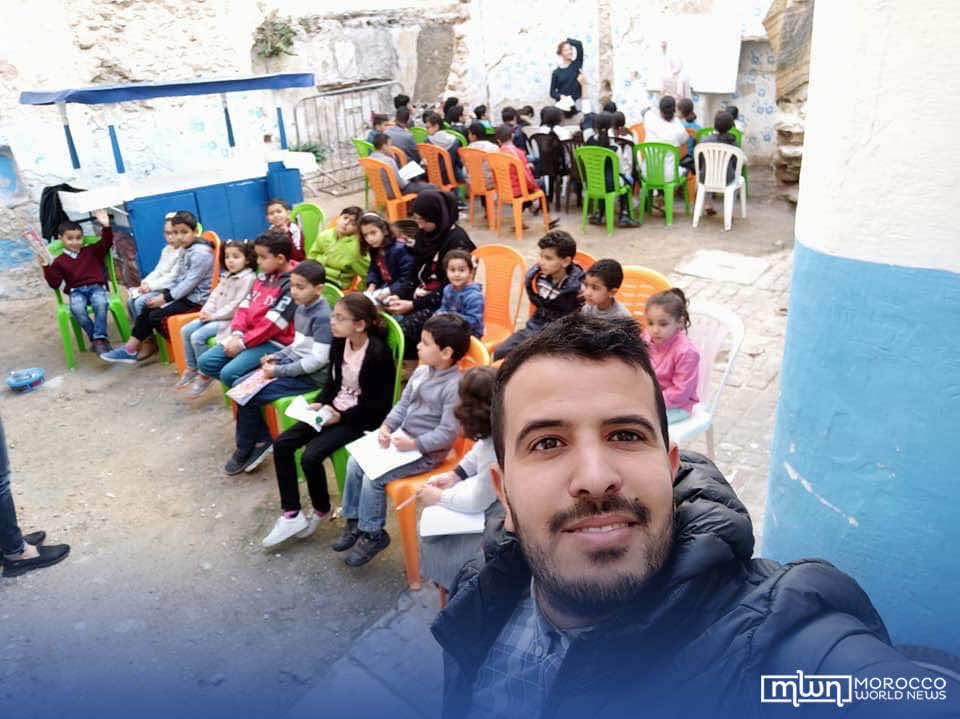 ‘The methods we use are unique’

“Now we have up to 200 students every week who come regularly, in the summer it is at its peak,” he explained, trying to hide his proud smile behind the coffee glass in his chalk-marked hand.

Despite his hectic lifestyle, Camel remains relaxed and open. About to set off for Safi to sample his mother’s Friday couscous, “Moroccan Mum’s couscous is always the best,” he laughed before explaining that he travels between Essaouria, Safi, and a small village in the Essaouira province several times a week.

The young teacher earns his living teaching at a rural primary school. “Teachers are not paid enough, if Morocco wants good teachers it needs to value them. That’s how the education system will improve.”

As well as teaching the children in the rural village, Camel runs a language and communication class for the other teachers one evening a week. Three nights a week he is in Essaouira teaching the advanced English class at the street school. “This is what I enjoy the most,” he grinned.

“I am not a normal teacher, I don’t follow a program. Life is a teacher, so I am teaching life-skills,” he explained.

“Moroccan children need confidence, they need to build their self-esteem, and know how to communicate and how to use the skills they learn,” the young teacher’s voice became louder at this point, earning looks from quiet tea and coffee drinkers sitting at neighboring tables.

His enthusiasm was not to be extinguished. “I teach three classes a week: Grammar and language, debate class, and global challenge.”

The content of the first two classes is self-explanatory but “global challenge” needed a deeper look.

“In global challenge we consolidate everything,” Camel began. “The students are split into groups and have to use what they have learned in the other two classes. They are given envelopes with questions inside and they go out into the medina and talk to people.”

The students then come back and analyze what they have learned from chatting to tourists and expats in the medina. The exercise, Camel underlines, builds not only language and communication skills, but also confidence, and, more importantly, resilience. 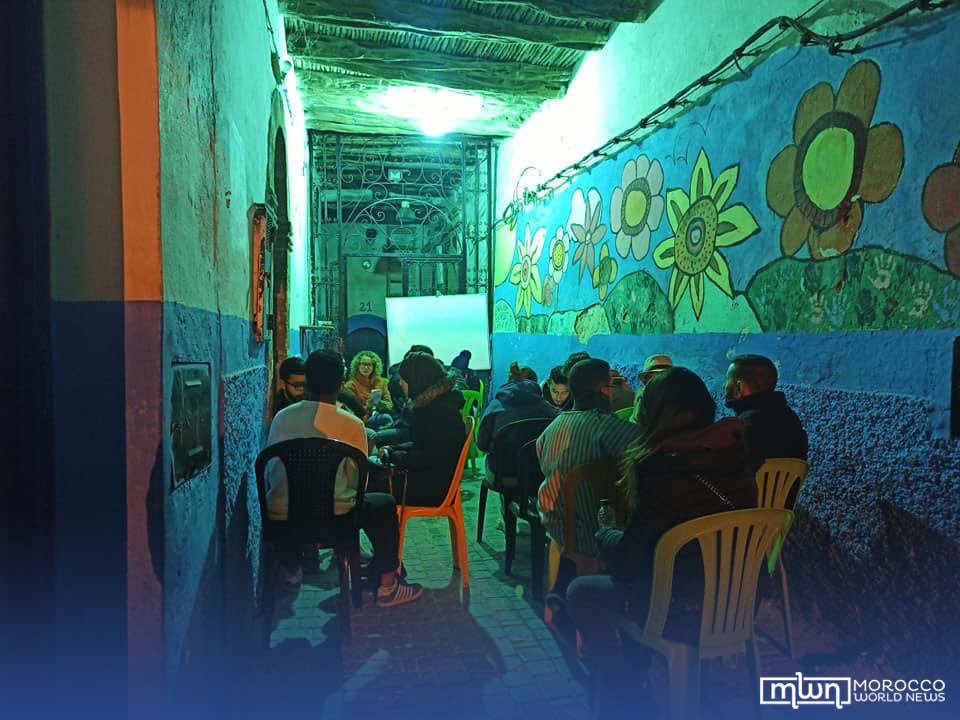 ‘We have no funding, no help’

The young teacher lamented that, though the program has been well received by locals, Moroccans and expats alike, the education authorities have largely ignored the initiative, despite his efforts to work with them.

“Everything we have has been donated by foreigners,” the teacher stated, without a tone of complaint.

“In the end, we don’t need anything. We have our mouths and our brains and a space to work.”

Many of the adult students, Camel said, come with their phones; they record the lessons or type on their phones. It is a modern, new way of learning that does not rely on funding or resources, but people.

Camel’s Facebook page, called “English Street Class,” has over 1,000 followers, and teachers, tourists, and expats, contact him on the page asking to come to help.

However, before the Facebook page became popular, Camel found tourists to help him with the classes in the hostels of the medina.

The young teacher chose to stay in hostels when he came to Essaouira from Safi in order to make connections and get to know people, and his gregarious nature has proved invaluable.

Though Camel is clear that he does not need handouts or endless supplies of stationery, he does hope to be able to raise enough money to fix the ancient walls of the street that are beginning to erode in the face of the strong Essaouira wind and humidity. 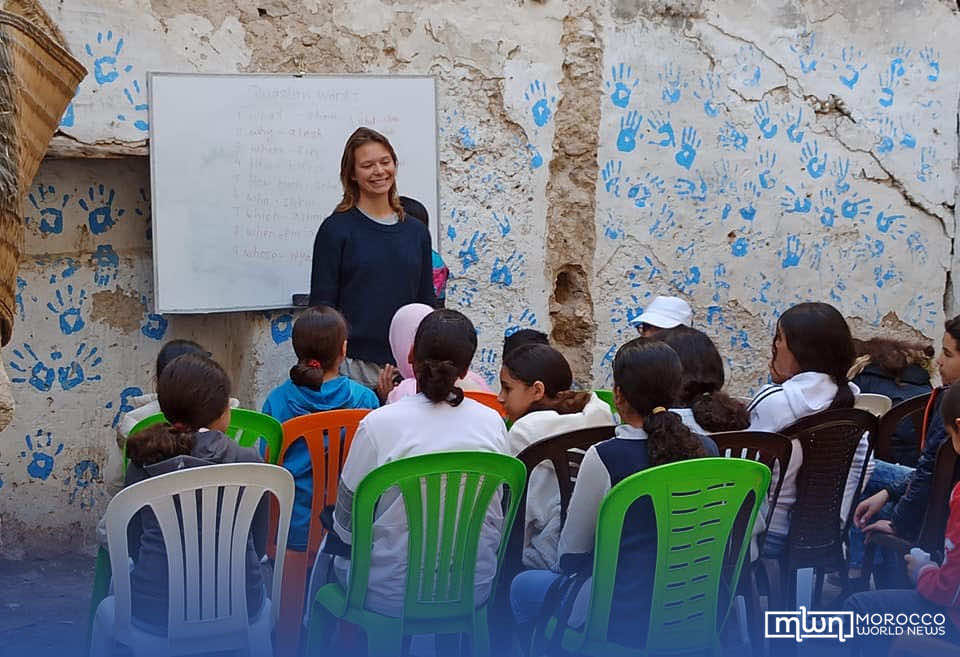 ‘The big dream, and the little dream’

On top of the renovation project, Camel has bigger hopes.

The Essaouira street school, he says, is the little dream. The “big dream” is to roll out the Street School across Morocco.

“There is a problem with the education system in Morocco,” he says simply.

The children, he said, learn languages by rote and do not learn how to communicate. Teaching science in French, a component of a recent education reform bill, is not the answer, the teacher went on, Moroccan children need to build confidence and communication skills.

Flicking through his phone, Camel proudly shared videos and photos of children who have benefited from his program.

“Amir is twelve, he has been learning English for three years, just listen to him talk!” The teacher brimmed with happiness as he watched the video of the young boy speaking perfect English with confidence and clarity.

Camel hopes that street classes, like those he has piloted in Essaouira, can fill that gap.

The next location he has in mind is his hometown, Safi.

“I have a location in mind, all I need is a place for teachers to stay.” He explained that there are Moroccan families willing to host foreign teachers but they need help paying for the meals and extra charges that come with having a long term guest.

Camel, however, seems confident that he can overcome these challenges and is eyeing Settat, near Casablanca, as location number three.

So, get ready, Morocco: Moucine Camel’s “big dream” may be ambitious, but, armed with his unbound enthusiasm, energy, and generosity, it will not be long before every city has its very own English Street Class.