Experts warned that sterilization stray dogs is the appropriate and humane approach to reducing the population.

Rabat – The Ministry of Health in Morocco cited a statement to announce that a hospital in Casablanca admitted a 12-year old boy on February 12 after he was attacked by stray dogs in Goulmima, Errachidia province.

The  statement from the 20 August Hospital in Casablanca said that the boy was hospitalized initially at the health center of the Hassan II university in Fez.

When he arrived at the hospital, the boy was suffering from wounds of varying severity the  head, lower leg, and thigh after an attack by a stray dog on February 9.

“All medical and nursing teams were mobilized from various specialties to ensure his condition, including maxillofacial surgery, anesthesia and resuscitation, pediatric psychiatry, pediatrics, pediatric surgery, plastic and orthopedics, and ophthalmology,” the ministry said yesterday on February 16.

The ministry said it will take care of all expenses for the victim’s medical treatment.

The boy is now in a stable condition and is still improving.

Animal rights organizations have been recently calling on the government to find ways to end the culling of stray dogs across Morocco.

Some experts argue Morocco should sterilize the dogs instead of killing them.

The warnings came after videos and photos of dogs culled in Dar Bouazza near Casablanca went viral, causing uproar.

Last year, Morocco’s Ministry of Interior signed an agreement with the agriculture and health sectors, along with the National Veterinarians Authority to reduce the stray dog population through sterilization.

The new approach will allow authorities to sterilize and vaccinate stray dogs and return them to their territories instead of killing them.

Several NGOs sheltering stray dogs are active in Morocco. One of them is Project Hayat run by Salima “Sally” Kadaoui.

Launched in 2017, the initiative aims to catch stray dogs, sterilize and vaccinate them, and then return them to their territory.

The treated dogs have a yellow tag on their ea, indicating that they are rabies-free. 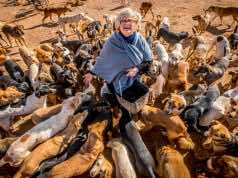