Since its return to the African Union in 2017, Morocco has made significant contributions to the continent in several fields.

Rabat – The Moroccan ambassador to South Africa, Youssef Amrani, emphasized the leading role that Morocco plays in the development of the African continent during an interview with South African television channel eNCA.

eNCA, South Africa’s first and most watched 24-hour news service, invited the Moroccan diplomat to participate in a talk show on February 23.

Morocco is one of the founding fathers of the African Union (AU), formerly the Organization of African Unity (OAU), recalled the ambassador.

The kingdom has never left Africa, despite its decision to withdraw from the OAU in 1984, because of violations of the organization’s charters, affirmed Amrani.

“Africa is at the heart of the Moroccan identity. It is an integral part of our DNA. We are not Africans simply by geography but also by history,” said the diplomat.

Morocco is united with its African neighbors by human, economic, and cultural ties, he added.

With its return to the AU in January 2017, Morocco sought to regain its legitimate seat within the organization that it helped create, revealed Amrani.

Since its return, Morocco has made significant contributions aiming to promote the emergence of a prosperous and courageous Africa, based on an action-oriented approach, he continued.

The end goal of Africa’s new approach is to reach the continent’s objectives in terms of peace, security, political reform, and economic and social development, emphasized the diplomat.

“We came back because we think the time has come for us as Africans to build a common future,” he argued.

Morocco is determined to work hand in hand with its African brothers to build the path for an era of progress and development in Africa, the ambassador affirmed.

All Africans must work for the stability of Africa, particularly through the encouragement of jobs generating economic growth, continued Amrani.

Concerning the question of Morocco’s territorial integrity and Western Sahara, the Moroccan diplomat stressed that the issue is now the exclusive responsibility of the UN through its Security Council.

The council will base its decisions on clear parameters, including the need to reach a lasting, realistic political solution. Morocco’s Autonomy Plan is in line with the UN’s parameters, underlined Amrani.

The ambassador recalled Decision 693 of the African Summit in Nouakchott, Mauritania, in July 2018. The decision reaffirmed the UN’s exclusive responsibility to solve the territorial dispute.

Morocco continues to contribute to continental peacekeeping efforts, Amrani said, citing the conflicts in Libya and South Sudan as examples of the kingdom’s efforts.

Morocco’s peacekeeping vision is based on cooperation, concluded the ambassador, recalling Morocco’s current position as a member of the AU’s Peace and Security Council. 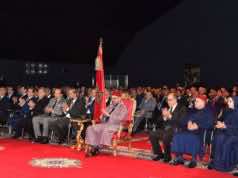