The Polisario Front continues to defy and threaten the UN-led political process in Western Sahara and the Security Council’s resolutions.

Rabat – The Polisario Front has, in another provocative move against Morocco, threatened to deploy its military in Western Sahara.

The leader of the breakaway group, Ibrahim Ghali, said the army of the self-proclaimed Sahrawi Arab Democratic Republic (SADR) is poised to respond to“all eventualities.”

The president of the self-proclaimed SADR met with members of the “army” on February 22 to praise the “high morale of the Sahrawi people’s ‘Liberation Army’ fighters and their constant willingness to defend the country and to protect the ‘liberated’ territories from all threats,” the official news agency of the Polisario Front wrote.

The statement comes as another threat of war, announcing Polisario’s readiness to carry out maneuvers defying the UN-led political process and UN resolutions.

The United Nations has, on numerous occasions, called on the Polisario Front to refrain from any move that would escalate tension in the region.

In his 2019 report on the conflict, the United Nations Secretary-General, Antonio Guterres, informed the Security Council that the Polisario Front has failed to “comply with requests by MINURSO to resolve” some violations.

“A logistics hub consisting of 10 new buildings located inside the restricted area near Bir Lahlou, which had already been declared a violation in 2017 and included in the list of long-standing violations in 2018, remained operational,” the report said. This is not the first time the Polisario Front has threatened war with Morocco.

Earlier this month, the breakaway group’s envoy to Algeria, Abdelkader Omar Taleb, made hostile comments during an interview with Sputnik News.

“Sahrawis will use any means necessary to gain their freedom, including arms if all political solutions fail,” the “ambassador” of the self-proclaimed SADR said.

He also called on Polisario members to be ready to take up arms against Morocco and criticized the UN, condemning its “lack of action.”

The Polisario Front’ s statements come amid a series of diplomatic wins for Morocco, who managed to convince seven African states to open diplomatic representations in its southern cities of Dakhla and Laayoune in Western Sahara.

Polisario and Algeria continue to issue hostile statements against the Moroccan government, questioning the validity of the diplomatic missions and describing the decision of African states to open general consulates in the region as a violation of the UN process.

The United Nations, however, has not commented on the new consulates in Moroccan southern provinces. 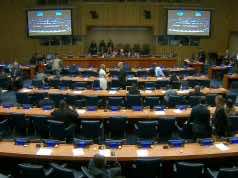