Mubarak is the longest serving Egyptian president. He took the reigns of power after the President of Egypt, Anwar Sadat, was assassinated during a military victory parade on October 6, 1981.

The military strongman ruled Egypt until he was ousted from power in 2011 by peaceful protests.

He leaves the legacy of a 30-year autocratic rule marked by corruption, repression, arbitrary arrests, poverty, and police brutality.

Hosni Mubarak was born on May 4, 1928 in a small village near Cairo. After completing secondary school education, Mubarak entered Egypt’s military academy. In 1949 he graduated as a lieutenant and in 1952 he graduated from the Air Academy.

Mubarak had a long career in the Egyptian Air Force before entering politics. He quickly rose through the ranks and eventually became Commander in Chief in 1972.

In 1963 Mubarak was captured as a prisoner of war by Morocco during the Sand War between Morocco and Algeria. It is believed that Mubarak was leading a squad of Algerian and Egyptian pilots preparing to strike Moroccan targets.

The Sand War was a short war about the border between Morocco and Algeria. The dispute stems from the ill-defined frontier limits between the two countries, inherited from the French colonial period.

The war broke out 18 months after Algeria gained independence from France. Egypt supported Algeria militarily and politically in the conflict against Morocco. Algeria also received military aid from Cuba.

In 1973 Mubarak was promoted to Air Chief Marshal after leading an air campaign against Israel during the October war between Israel and a coalition of Arab states.

Mubarak became a national hero in Egypt after playing a major part in the successful attack that surprised the unprepared Israeli forces.

In 1975, President Anwar Sadat chose Mubarak to become his Vice-president. This was an unexpected move for many, as Mubarak was only ranked third in the military hierarchy at the time.

Sadat had strong faith in Mubarak and let him handle many of Egypt’s regional issues.

Mubarak played an instrumental role in negotiating the Camp David accords in 1978. The historic signing of the accords meant that Egypt became the first Arab country to recognize Israel as a sovereign state. Sadat signed the accords and received the Nobel Peace Prize for his efforts.

After becoming president in 1981, Mubarak pursued a policy of cold peace with Israel, while developing strong relations with the US.

During his presidency, Mubarak also attempted to restore ties that had been lost with Arab neighbors after the signing of the Camp David Accords, a move that many of Egypt’s Arab neighbors condemned.

The autocratic ruler was re-elected president three-times in 1987, 1993 and 1999 as he was the only candidate allowed to run for office.

In 2005 Mubarak was re-elected for a fourth time, while allowing other candidates to run for the first-time during Mubarak’s authoritarian rule. Despite letting other candidates participate, the election came under criticism as the new election law heavily favored Mubarak.

The Egyptian parliamentary election of 2010 was also strongly criticized domestically and abroad. The ruling party was accused of manipulating the vote to ensure a victory. Opposing parties deemed the election rigged, corrupt, and anti-democratic.

Lack of democracy in Egyptian presidential and parliamentary elections was a common theme during Mubarak’s presidency.

With decades of autocratic rule and recent elections in mind, Egyptians took to the streets of Cairo on January 25, 2011, to protest against the rule of Mubarak.

The protests against Mubarak came as a result of growing dissatisfaction against his oppressive regime and the low standards of living in the country.

The protesters were inspired by the peaceful Tunisian revolution that ousted the President of Tunisia, Zine El Abidine Ben Ali, on January 14, 2011.

The Tunisian revolution lasted for several weeks and is widely seen to have kicked off the Arab Spring, a popular movement that quickly spread across the region.

After 18 days of unprecedented protests, Mubarak was forced to step down on February 11, 2011.

The news was greeted by cheers from millions of Egyptians, but the demonstrations had been plagued by police brutality.

The large-scale demonstrations resulted in tens of thousands of Egyptians being arrested, and 846 civilians were killed during the uprising.

In 2017 Mubarak was released, after the Egyptian top appeal court acquitted Mubarak of involvement in the killing of protesters. Other members of Mubarak’s regime were also set free.

The prosecutor argued that there was no reason to hold him for longer since Mubarak had already served time for embezzling state funds.

In total, Mubarak spent six years in detention at a military hospital in Cairo. Egyptian Singer of CAN 2019 Official Music Video Apologizes to Morocco 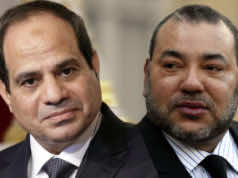