Morocco and Pakistan have maintained friendly ties for almost a century.

The Moroccan diplomat presented the future of Moroccan-Pakistani relations in a recent interview with the Pakistani news agency Online International News Network.

The two countries are set to conduct a series of high-level meetings to discuss their cooperation in several fields, including trade, defense, and political consultation, revealed the ambassador.

Although Morocco and Pakistan established official diplomatic ties in 1958, cordial relations between the two countries predate the 1950s, revealed Karmoune.

Pakistan helped Morocco in its independence struggle by issuing diplomatic passports to the leaders of the Moroccan Liberation Army, he explains.

The common faith and shared experiences underpin the close and friendly relations between Morocco and Pakistan, said the diplomat.

Both countries are members of the Al-Quds Committee, chaired by King Mohammed VI, and of the Organization of Islamic Cooperation (OIC), he illustrated.

Karmoune stressed the importance of promoting trade and business ties between the two countries.

Morocco offers Pakistani investors and businessmen several opportunities to promote the products, especially in the field of textile and handicrafts, since Morocco has access to the European and American markets thanks to Free Trade Agreements, specified the ambassador.

Morocco and Pakistan have established a joint business council to further explore the cooperation opportunities, he added.

The South Asian country, meanwhile, can benefit from Morocco’s expertise in solar energy as well, said the diplomat, emphasizing Morocco’s regional leadership in the fields of solar and wind energy.

There is great potential for the two countries to exchange ideas in the field of tourism since both countries enjoy a strategic location, he added.

Morocco and Pakistan have access to immense agricultural and natural resources thanks to their extensive coastlines. In order to further boost maritime cooperation, the Tangier-Med Port and the Gwadar Port, in southwestern Pakistan, will sign an agreement in the future,  Karmoune added.

Relations between Morocco and Pakistan have traditionally been strong and cordial. Morocco maintains an embassy in Islamabad, while Pakistan maintains one in Rabat.

Pakistan is a supporter of Morocco’s territorial integrity. The Asian country does not recognize the self-proclaimed Sahrawi Arab Democratic Republic (SADR) and supports Morocco’s Autonomy Plan and the UN-led process in Western Sahara.

Between 2007 and 2018, trade between Morocco and Pakistan almost tripled. Moroccan exports to Pakistan grew from $147 million to more than $348 million, while its imports from Pakistan climbed from $11.5 million to exceed $35 million. 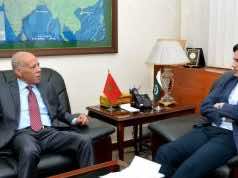