The judiciary police in Marrakech arrested a 26-year-old truck driver for deliberately trying to run over a group of students in front of a school this afternoon.

Police intervened quickly and put the driver in custody for intentionally causing traffic accidents and causing material losses to private property, said a press release from the General Directorate of National Security (DGSN).

The incident happened in the afternoon on Wednesday, March 11, in front of Laraki school, a well-known private school in Marrakech.

The video documents the man repeatedly driving back and forth, attempting to hit as many students as possible and damaging several cars in the process.

According to an initial report, the incident caused light injuries for four students and material damage to three cars and three motorcycles.

Authorities transferred the injured students to the Mohammed VI Hospital to receive the necessary treatment.

Witnesses report that the driver had a dispute with a group of students before going on a rampage.

The suspect remains in custody pending investigations to determine the motives behind his criminal act, according to DGSN. 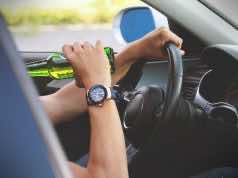 Arizona woman runs down husband with car for not voting: police