The former Vietnamese refugee is telling her story in Morocco and advocating for people in transition.

Rabat – In the golden light of a Moroccan afternoon, Laura Duong Larma sits outside with a family of refugees and talks. This is not the first time she’s done this, and it is likely not the last, as she travels around the world and advocates for people in a position that she is all too familiar with.

Morocco is her latest stop, and she came to the country with a purpose. She wants to raise awareness about the struggles of migrants and refugees in the region, and do something tangible to help them.

When asked why, Duong Larma had a simple answer: “I was once that person.”

Born in Vietnam, Duong Larma recalls how as a child, she and her family were forced to flee the cruelties of the Vietcong on a small boat—their second attempt to leave the country. As they were rocked on the ocean, terrified of being caught once again, Duong Larma remembers the fear that she felt.

“I didn’t know that I was going to make it,” Duong Larma said.

This attempt was successful, however, and she and her family ended up in a Malaysian refugee camp. The conditions were far from ideal, with limited access to sanitation, and shelters made of plastic, corrugated metal, and anything else they could find. But Duong Larma’s family turned out to be lucky: After 18 months, they were sponsored to immigrate to the United States.

Duong Larma was 10 when they arrived, and her family settled in Pennsylvania. Things were not always easy, though, as the family struggled with the language barrier and the new cultural landscape. But Duong Larma was determined, and she knew she had to make the most of the opportunity presented to her.

She worked her way through college, and after graduating she had careers in business and finance before finding her way into the tech world. With her success, she wants to give back and show the world what happens when vulnerable people are given opportunities.

“I am an outcome of refugees,” Duong Larma said.

Working towards a better future

Throughout her retelling, Duong Larma stressed that stories like hers are still happening and that in many ways the situation of refugees has not changed.

“It could still happen to anybody,” said Duong Larma. “[We’re] repeating the cycle.”

In Morocco, in particular, Duong Larma brought up the struggles faced by migrants, many of whom come from Sub-Saharan Africa. While their situations differ from those of refugees in Morocco, she believes that they face similar challenges.

“They have it just as tough,” Duong Larma said. “They didn’t realize how bad it was going to be for them in Morocco.”

During her stay in Morocco, Duong Larma has made a point to visit the homes of refugees and migrants to see the circumstances they are living in. Her goal in these visits is to “give people hope” that their situations can change for the better.

In order for this to happen on a wide scale, however, Duong Larma believes that society needs a shift in “human consciousness” in order to bring awareness and motivate people to care about and address these issues.

Duong Larma is trying to bring about this change starting with her own attitude, stating that one of her goals is to help everyone become “the happiest person they can be.”

Another strategy Duong Larma employs is focusing on empowering women, something she sees as necessary to instigate change.

“I really feel for the women here,” she said, saying that they face unique challenges as migrants and refugees.

She hopes that her story and her book “Blockchain for Humanity” can provide skills people can use to reach their goals.

“Someone helped me,” she said, adding, “I want to leave this place a little better.” 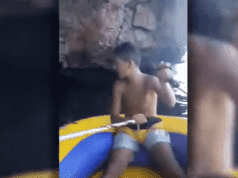