Rabat – Morocco’s Ministry of Health has confirmed today three more cases of the novel coronavirus (COVID-19) pandemic, bringing the total number of cases to 61 to date.

The three new cases are in addition to four  that the ministry confirmed this morning.

The Health Ministry believes the coming days will be decisive for Morocco as the virus spreads.

Minister of Health Khalid Ait Taleb said yesterday that the situation is under control so far. He added that more than 1,362 people made contact with 54 confirmed cases.

He emphasized the  need to implement the preventive measures issued by authorities so that the number of cases does not expand further.

“When local cases are confirmed, the figure will probably increase,” the minister predicted.

The situation, according to Ait Taleb, requires Moroccans to limit movement and self-isolate at home.

The minister also thanked health experts for their important role in the situation, calling on citizens to comply with measures out in place by the government to limit the spread of the virus.

In a joint statement, with the Ministry of Interior, the Ministry of Health asked  citizens to not leave their houses if they are not going to work or for emergency cases.

The statement also gave green light to security forces to ask people not to wander the streets. 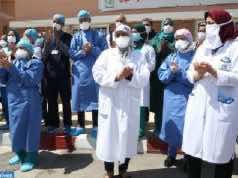