Vanity Fair lauds Hajjaj for his “vibrantly layered portrait photography and bespoke craftsmanship that filter his own Moroccan heritage through the lens of street style.”

The shoot contains ample nods to Hajjaj’s soon-to-be-released clothing brands Andy Wahloo Superlux and Andy Wahloo Souk-Wear, named for the photographer’s trendy Parisian bar and pub Andy Wahloo, an Arabic play on Andy Warhol which translates to “I have nothing.”

In typical Hajjaj fashion, each subject in the Vanity Fear spread is backdropped by “7assira,” or traditional Moroccan carpets.

Grammy-award winning Russian-German musician Zedd does not appear to have on any obvious references to Morocco, but Hajjaj bordered the star’s frame with cans stamped with “Andy Wahloo Superlux” written in Arabic. Hajjaj incorporates these Warhol-like symbols into each photograph for the “Spin Doctors” spread.

Honey Dijon, an American electronic musician based in New York City, is photographed on a stack of crates wearing a traditional black Moroccan top stamped with Hajjaj’s Souk-Wear branding, paired with plaid balghas.

Paris Hilton is not the first person to come to mind when you think of electronic dance music or DJing, but the 39-year-old hotel heiress and former reality star has been spinning at exclusive clubs since 2013.

Seated atop a Lous Vuitton trunk, the pop culture icon flaunts Fendi pants that contrast sharply against the bright orange carpet behind her.

Hajjaj’s innovative Moroccan flair has earned him the nickname “the Moroccan Andy Warhol,” and his distinctive artistry has been widely celebrated in the fashion and photography industries.

In February, the Larche-born photographer styled American pop superstar Billie Eilish in a Wydad Athletic Club jacket and rings decorated with her name in an Arabic script inspired font for Vogue’s March 2020 spread. 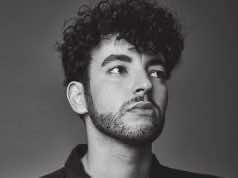