Desert locusts can cross a distance of up to 100 miles per day and threaten the lives of farmers who depend on local crops for food.

“Although the situation has been very calm so far, we are preparing to deal with the arrival of locust swarms,” ​​said Hamouni. “Rapid mobilization to combat it would reduce the environmental, social and economic risks of this scourge in the region.”

The expert explained that during the current period, the Desert Locust is flocking to East Africa, where environmental conditions are favorable for its reproduction.

Beginning in May, the weather conditions in West Africa would be advantageous for the reproduction of locusts, especially given the start of the African Sahel region’s rainy season in June.

“The arrival of the locust swarms would coincide with the rainy season, which contributes to creating an environment suitable for their reproduction for four months, and which would cause great damage to the pastoral and agricultural resources of these countries,” explained Hamouni.

The expert advised of a rapid intervention on the first locust groups to reduce their number and limit their multiplication. This would alleviate their environmental and economic risks to North Africa and the Sahel region.

“If the commission succeeds in fighting the Desert Locust in the western region by stopping the invasion in the Sahel states, Algeria, Morocco, Tunisia, and Libya will be safe from danger.”

The CLCPRO aims to strengthen intervention capacities in the Sahel region to conserve agricultural and pastoral resources, and to prevent an increase of locust numbers approaching North Africa. 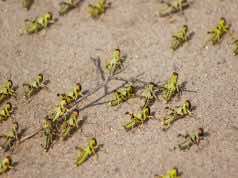