The firm intends to reactivate operations for its Guercif project once the COVID-19 crisis has passed and travel restrictions for workers are lifted.

Rabat – Industrial company Predator Oil & Gas announced that it has paused drilling operations with its Guercif project in eastern Morocco, due to COVID-19 dangers and travel restrictions for workers.

In a statement, the company said that infrastructure is ready and on standby to reactivate drilling operations in the region, which have stopped due to the novel coronavirus crisis.

Predator Oil & Gas intends to resume operations when Morocco passes the peak of its COVID-19 infections and lifts travel restrictions, a statement from the company said. Predator aims to be “drill-ready” by the time the pandemic passes, according to the statement.

Morocco suspended all international flights and maritime travel on March 15.

The British industrial firm confirmed that the rig to drill the Guercif prospect is “stacked in a secure yard at SDX Energy.”

The company said that all commercial contracts will remain on hold “in respect of drilling” until work returns to normal.

The country entered into a lockdown on March 20, and the measure will continue until April 20. This limits the country’s in-person economic activities to only “essential” operations.

Predator explained that Morocco is impacted by COVID-19 but it is not “yet at the peak” of its course of infections.

In February, prior to the outbreak of the virus in Morocco, the company announced plans to commence rig mobilization in Guercif between March and April.

The Guercif project covers an area of 7,269 square kilometers and lies approximately 250 kilometers “due east of and on trend with the Rharb Basin where shallow gas production has been established by SDX Energy Plc for several years,” according to Predator Oil & Gas.

The British company owns 75% of the Guercif project and operates in a joint venture with Morocco’s National of Hydrocarbons and Mines Office (ONHYM). ONHYM owns a 25% share in the project. 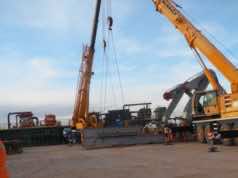