The self-isolated neighborhood celebrated the girl’s birthday with creative flair amid the COVID-19 crisis. 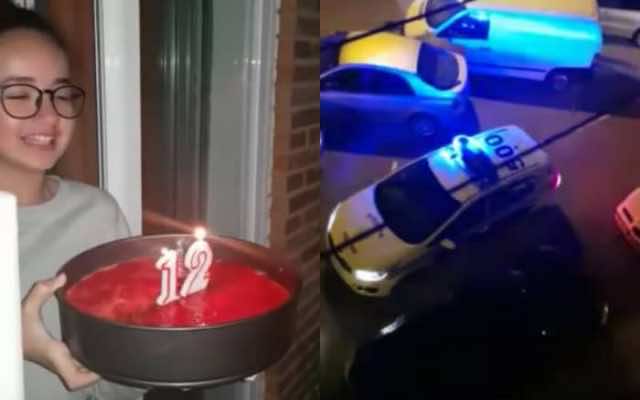 Salma filmed a video of the community celebrating her 12th birthday. Neighbors and police officers offered Salma a unique gift: They serenaded her with a birthday song from their nearby balconies.

Salma expressed gratitude for the creative community’s support, showing her birthday cake to the singers from her family’s balcony.

Salma and her family, who live in Spain, come from the Moroccan city of Beni Mellal.

Solidarity acts and initiatives have been important during the coronavirus crisis. People have shown support for one another in creative ways, such as Salma’s neighbors, and in practical acts.

In Morocco, medical personnel have come out of retirement to assist patients on the front lines of the crisis. Hotel owners have hosted stranded international tourists across the country, from the Merzouga desert to bustling Fez. In a move reminiscent of Salma’s birthday, security services in Casablanca encouraged civilians to join in for communal songs, including the national anthem, from one neighborhood’s windows and balconies.

On a national level, Spain demonstrated support for Morocco and its neighbors, pledging an aid package to help countries in the Maghreb with their pandemic response.

Spain ranks fourth in Europe for states worst affected by COVID-19. The country has recorded more than 110,000 cases, and its death toll surpassed 10,000 on April 2. Spain entered a nationwide lockdown on March 14, one day after announcing a state of emergency.

Morocco has confirmed 691 cases as of 6 p.m. on April 2, including 44 fatalities. The country entered a nationwide lockdown on March 20, after declaring a state of health emergency on March 19.