The decision is in line with national efforts to limit social gatherings and curb the spread of the novel coronavirus.

Marrakech – The Hassan II Trophy Association (ATH) announced on April 3 its decision to postpone the 47th Hassan II Trophy and the 26th Lalla Meryem Cup golf competitions until further notice, as a preventive measure against the spread of COVID-19.

ATH’s decision aligns with measures taken by sports organizations in Morocco and around the world, following its European partners’ postponement of the European Tour and Ladies Tour.

ATH, which is headed by Prince Moulay Rachid, partnered with the European Tours network in 2010 to offer both the Hassan II Trophy and the Lalla Meryem Cup.

The organization canceled both competitions in light of the international coronavirus crisis. ATH and the Royal Golf Confederation emphasized their full engagement in Morocco’s national efforts against the novel coronavirus epidemic, according to Maghreb Arab Press (MAP).

The golf organization focuses on the economic and touristic aspects of the sport. ATH signed major partnerships with the Royal Golf Federation in Marrakech to promote golf tourism and training. ATH also hosted the 22nd of the International Golf Travel Market (IGTM) in October 2019.

Morocco has postponed all sporting events in the country to curb the spread of COVID-19.

The Association of Tennis Professionals (ATP) suspended the annual men’s tennis tournament, the Grand Prix Hassan II, and five other tournaments on March 12.

The Royal Moroccan Football Federation (FRMF) suspended all matches at all levels on March 14. The postponement aligns with the country’s nationwide lockdown amid a state of health emergency, which restricts citizens’ movement and forbids large gatherings.

On a continental level, the Confederation of African Football (CAF) postponed the 2020 African Nations Championship (CHAN) on March 17.

The Tokyo 2020 Summer Olympics, the world’s leading international sporting event, is also delayed. Set to kick off in July 2020, the competition will now take place from July 23 to August 8, 2021. 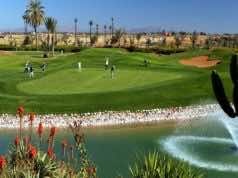 Golf in Morocco: History and Growth