Thanks to pre-existing data on SARS and MERS, scientists could sooner come up with a drug to cure patients and mitigate its lethality or a vaccine to prevent its spread.

Zaouit Cheikh – As medical experts around the world are trying their best to find a cure for COVID-19, scientists from Australia’s Monash University made a breakthrough when they found the anti-parasitic drug “ivermectin” effectively kills the virus in cell culture.

While the tests were “in vitro” in laboratory cell cultures, scientists are optimistic ivermectin could yield the same results with “in vivo” trials on living organisms.

The US’s Food and Drug Administration (FDA) has previously approved of ivermectin as an effective anti-parasitic in certain cases.

Monash University’s study, published April 3 in the journal Antiviral Research, proved ivermectin could be effective against COVID-19 with in vitro trials. The scientists, led by Dr Kylie Wagstaff, found the RNA of the virus is eradicated by administering only one dose of the drug, and it takes merely 48 hours for the pathogen to be fully wiped out.

“Even at 24 hours there was a really significant reduction in [the viral RNA],” Wagstaff said.

Scientists are still working at breakneck speed to ascertain if the dosage used in vitro is safe for humans. The timeline most infectious diseases experts have suggested until COVID-19 is overcome could be curtailed if ivermectin can treat the virus in humans.

Wagstaff explained the importance of the drug’s potential for ending the pandemic. “In times when we’re having a global pandemic and there isn’t an approved treatment, if we had a compound that was already available around the world then that might help people sooner,” she said.

Scientists have acknowledged the length of time it will take to develop a vaccine as at least 12-18 months. “Realistically it’s going to be a while before a vaccine is broadly available,” Kylie stated.

With a substantial amount of scientific data on these two coronaviruses, research to come up with a vaccine for COVID-19 might have been accelerated by years. When early clinical testing began on a possible vaccine on March 23, just 63 days after scientists sequenced the virus’s genome, it was, according to American immunologist Anthony Fauci, “overwhelmingly the world record.”

Effective vaccines would normally take a least a decade to be forged in labs and include meticulous clinical phases. Breaking the record for creating a possible vaccine, however, is thanks to pre-existing studies on COVID-19’s “siblings,” not to mention the genome sequencing of the virus China shared with scientists around the world in January.

One year seems like such a long time given the speed with which COVID-19 spreads. This coronavirus’s easy transmissibility makes it more likely to kill more people than any other recent plague.

Waiting for the virus to run its course will only cost the world a huge death toll, irrespective of the economic crisis lurking in the background of this pandemic. Some intellectuals say gaining herd immunity, by allowing a high portion of the population to become infected, would be an effective way to bring the pandemic to its heels.

But the virus shows no mercy for elderly people with weakened immunity systems or people who suffer from an underlying health problem. Aiming for herd immunity would be like trying to eliminate millions of people just to save the economy.

Some countries tried not to respond too aggressively to the pandemic, but their growth rates in daily case numbers show how that allows the virus to spread.

Thanks to pre-existing data on SARS and MERS, scientists could sooner come up with a drug to cure patients and mitigate its lethality or a vaccine to prevent its spread.

Until then, people should take social distancing seriously, stay at home, and avoid gatherings. Sticking to these rules will spare humanity much loss, both human and financial. Last but not least, there is no cure for COVID-19, so people should not believe hearsay and rumors.

Instead, we must maintain our sanity and humanity as good citizens and not disappoint the healthcare workers and scientists who are trying to save us. 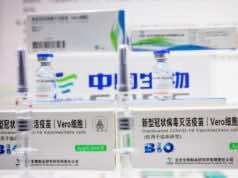