Nora Attal has appeared on the cover of British Vogue and Vogue Arabia and has walked runways for Prada, Fendi, and Valentino.

British-Moroccan model Nora Attal is taking part in a campaign to raise money for the British National Health Service (NHS). The fashion model posted a picture of herself running on Instagram to support the pressured NHS during the novel coronavirus crisis. 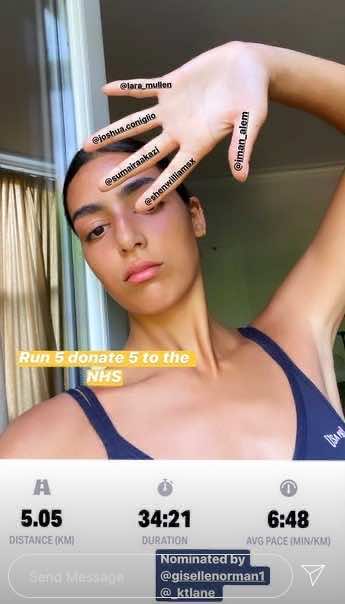 Participants in the UK “Run for Heroes” campaign use their allocated exercise time to run, walk, or cycle 5 kilometers while social distancing at least 2 meters, and donate £5 to the charity’s fundraising page. So far, the campaign has raised over £500,000 to support health workers during the pandemic.

Attal, 20, ran 5 kilometers and donated £5 to the “Run for Heroes” campaign, and nominated five contacts, including Paris-based fashion stylist Iman Alem, to join the cause. The model shared a post-run selfie on her Instagram story with the text “run 5 donate 5 to the NHS.”

The campaign, launched on Instagram in March by documentary maker Olivia Strong, has attracted more than 50,000 participants.

The Moroccan-British model began her career at the age of 14 when photographer Jamie Hawkesworth spotted her. She has walked for Prada, Fendi, and Valentino and featured in campaigns for international fashion houses Versace and Burberry.

The model has cited Imaan Hammam as an inspiration and source of advice. Hammam “is the sweetest girl, she’s Arabic too, so we clicked immediately,” she told Net-A-Porter in a January interview.

In February, Attal slammed Getty Images after the website falsely identified a photograph of her at a fashion party as British singer Kara Marni.

The model took to Instagram to call out misidentification as a race issue, saying: “There have been countless times where I experienced online, in person, seen, or heard other people of color being mistaken for someone else. This isn’t just a coincidence – it’s an issue and needs to be addressed.”