With the outbreak of COVID-19, the global economy has come to a halt, and Iranian decision-makers are in no position to incur tremendous economic losses and still safeguard the regime.

Ifrane – COVID-19 is a global threat to public health. Since its outbreak in China, the pandemic has quickly spread due to globalization with new epicenters causing heavy casualties. In the Middle East, Iran has been massively impacted, recording 4,958 deaths and 79,494 confirmed cases of COVID-19 as of April 18, according to the WHO.

Assessing the spread of the pandemic across other countries in the region points back to Iran’s strategy.

In the early phases of the outbreak, the government was passive, not taking drastic measures to halt the outbreak. President Hassan Rouhani even objected to quarantining entire cities.

On February 21, Iran held parliamentary elections without putting in place major preventive measures. Furthermore, the government was reluctant to impose and reinforce social distancing and lacked transparency on the severity of the COVID-19 outbreak.

It was only after the death of some officials from the Iran Revolutionary Guard Corps and the religious establishment that the mismatch between the government’s mobilization and the spread of the pandemic shrank.

Whereas the indifference of Iranian authorities towards the spread of COVID-19 generated criticism from the international community, the reality was more complex for three interconnected reasons.

First, the Islamic Republic of Iran has a long history of economic hardships. Following Khomeini’s revolution in 1979 and the US hostage crisis, Iran’s economy improved only modestly due to both internal and external pressure.

Between 2005 and 2013, the presidency of Mahmoud Ahmadinejad jeopardized the Iranian scene because its distinct foreign policy opposed the West and accommodated the non-West.

By 2012, the economic sector had bottomed out, and the election of Rouhani raised the hopes of many Iranians. The president soon announced new policies to cure the economic sector, improve Iran’s global reputation, and solve the nuclear issue.

Specifically, he advanced a trickle-down strategy, planning for the recovery of the economy to culminate in the reconfiguration of Iran’s status. For Rouhani, the main point was to preserve the legitimacy of the regime from potential upheaval.

With the outbreak of COVID-19, the global economy has come to a halt, and Iranian decision-makers are in no position to incur tremendous economic losses and still safeguard the regime. This is one reason why imposing a nationwide quarantine did not seem feasible, at least in the early stages of the outbreak.

Second, economic sanctions increase the vulnerability of Iran in the face of COVID-19.

In the United States, the 2016 presidential elections paved the way for increased American hostility towards Iran. In fact, Donald Trump began criticizing the JCPOA (Joint Comprehensive Plan Of Action), commonly known as the Iran nuclear deal, labeling it the worst deal ever.

In May 2018, the United States unilaterally withdrew from the deal and called for a new deal. The US also reinstated primary and secondary sanctions on Iran, bringing Iran’s economic sector to a halt. The decision illustrates Trump’s policy of maximum pressure to isolate Iran from the global financial system and besiege the government.

Consequently, the Iranian rial has sharply depreciated, and the purchasing power of Iranian people has considerably shrunk.

Iran’s medical needs to combat COVID-19 are immense since the health care system is weak, and access to the American dollar to make purchases is restricted.

True, some signatories of the JCPOA tried to use the “Instrument in Support of Trade Exchanges,” a mechanism to deliver humanitarian aid to Iran using euros. However, the aid has not met Iran’s severe needs, especially at a time when the price of oil has recorded a historic drop.

In this context, COVID-19 is exacerbating the impact of sanctions, thus uncovering the flaws of the Iranian government.

Third, Iran’s strategy to resist sanctions creates an additional burden in the context of the virus outbreak. Since the establishment of the Islamic Republic, Iran has managed to survive the impacts of international pressure with its “economy of resistance.” These policies include the expansion of domestic industry, the reduction of oil dependence, and revisiting of consumption norms, and barter trade.

The economy of resistance is not an ad hoc response to stiffening policies because it mirrors the revolutionary principles of Khomeini (e.g. independence and self-sufficiency), and it has constantly been adopted to prevent the economy from crumbling.

The reluctance of Iranian authorities to curtail their exchanges with China despite the threat of COVID-19 fits into this strategy. In fact, Iran sought economic refuge in China, among other eastern countries, to alleviate the impact of sanctions.

But there is no doubt Iranian-Chinese relations benefited from the so-called trade war and China’s interest in expanding into the Middle East and Africa. These conditions are conducive to economic momentum in Iran. China is also a major investor in Iran, especially in the sectors of energy, transportation (mainly maritime and railway), and construction.

Amid this reciprocity, it is no surprise that Iran had not suspended air travel with China until becoming a hotspot of the virus itself.

COVID-19 is an invisible threat, just like all threats to public health. Because health crises neither seem to attack the state or the values of the ruling elite in authoritarian regimes, they do not seem to directly pertain to regime security. That is why crisis management tends to be slow and sometimes detached from the reality on the ground.

In retrospect, the Iranian regime responded as authoritarians to COVID-19. Specifically, the authorities masked the severity of the virus by controlling the narrative as was obvious among health experts.

They trapped people in the illusion that the threat was remote, even arguing the virus might be a deception of the United States to cause chaos in Iran.

Khamenei also encouraged citizens to vote in the February parliamentary elections, and Iranians celebrated Nowruz, the Persian new year, without restrictions. Nevertheless, the voter turnout reflected a sharp decrease compared to previous elections. In response, Khamenei stated that the media had magnified the severity of the virus to dissuade the citizens from voting.

The truth is the Iranian people have lost trust in the regime. The authorities proved to be efficient in responding to public discontent with violence and oppression, but passive in containing an invisible threat like COVID-19, prioritizing the economy and regime.

An absence of accountability and transparency during the crisis is now resulting in massive public pressure on the Iranian regime. Still, it would be naive to say the pandemic will automatically destabilize the regime because the elite managed to absorb many social shocks in the past.

Instead, what remains certain is that the exorbitant death toll and the number of confirmed cases reveal both numerous dysfunctions challenging the social contract between Iran’s elites and Iran’s people and the repercussions of economic sanctions on human rights. 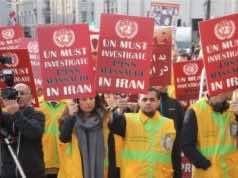 Lights of Liberty on the 30th Anniversary of 1988 Massacre