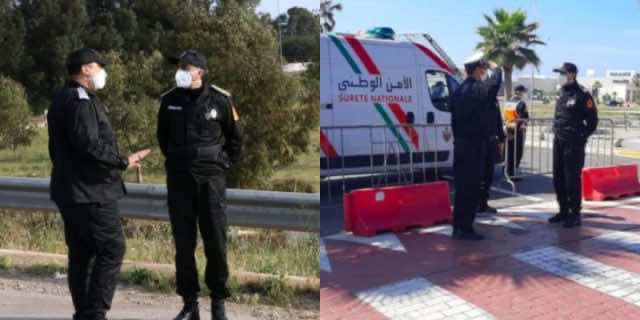 Wearing his police uniform while respecting Morocco’s COVID-19 preventive measures, El Hammouchi carried out an inspection tour of several police checkpoints to ensure the success of the state of health emergency and confinement operations.

During the tour, he also provided moral support to his fellow officers.

Although officers are doing their best to avoid COVID-19 contamination, the DGSN confirmed an unfortunate 57 cases among its ranks.

In an effort to stem the national spread of the virus, the DGSN has deployed police officers to a number of locations across Morocco and launched frequent night patrols to ensure the respect of the national curfew.

The DGSN has also mobilized all its logistical means and technology to support security officers and citizens in the fight against the proliferation of COVID-19.

The DGSN’s measures include a mobile application developed by its engineers that allows police officers at various checkpoints to track the movements of Moroccan citizens and residents to ensure their compliance with the state of health emergency.

Developed to monitor individuals’ pathways during their authorized outdoor activities, the app enables movement tracking when an individual passes through a police checkpoint and presents their movement permit, which contains their ID number.

The DGSN is also cracking down on COVID-19-related fake news or those intended to sow panic among citizens uring the state of a health emergency.