The ministry announced that public authorities have opened an investigation into the matter.

Rabat – The Moroccan Ministry of Education declared that its official website was hacked this morning, in an explanatory press release.

The ministry’s technical service succeeded in regaining operating control of the website, and found that all the site’s data was safe.

The statement indicated that public authorities have opened an investigation into the matter, in order to arrest the people involved in the criminal exploit.

The ministry condemned the “irresponsible” behavior that likely intended to prevent citizens from consulting information on Moroccan education.

This is not the first time hackers have overrun the ministry’s website. In July 2009, a hacker put American rapper Eminem’s photo on the website with a bomb in his hand.

The 2009 operation coincided with the ministry’s announcement that it would allow baccalaureate students to retake the exam.

Hacking such a website during the pandemic period is considered especially sensitive, given the current necessity of remote learning. Moroccan students need to consult educational websites regularly as part of the remote learning program that the ministry adopted.

On March 16, the ministry launched the distance learning initiative via the website “Telmid TICE” and television channel 4, “Athaqafia.”

The website provides lessons grouped according to levels and subjects. It includes hundreds of pre-recorded lessons in video format, and its database receives regular updates.

The Ministry of Education announced on April 2 that the website has reached 600,000 users per day since its launch. 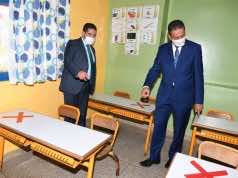 The Return to School During COVID-19: A Moroccan Perspective