The opening is part of the company’s strategy to expand its presence in North Africa.

Rabat – Italian telecom service Sparkle announced the inauguration of a Point of Presence (PoP) in Casablanca, the company announced in a press release on April 29.

Sparkle’s PoP is located at the Orange Maroc open data center, and will help multinational enterprises seeking to expand their activities in Morocco.

The company’s PoP will give European firms “Ethernet and virtual private IP-VPN networks to connect their headquarters with their branches in Morocco and thus enable intercompany communication,” the company said on its website.

The Italian company touted Morocco’s assets and political stability, which attract foreign investments “especially from Italian and European multinationals that are increasingly establishing offices and industrial sites in the country.”

Sparkle explained that Morocco has strong trade relations with several countries in West Africa, which position the North African country as a “commercial hub from Europe to the sub-Saharan African region.”

The new opening is part of the company’s strategy to expand its presence in the region.

“The PoP in Casablanca completes Sparkle’s presence in North Africa, stretching from Egypt to Morocco, and confirms its role as a reference partner for telcos, service providers and multinational companies seeking to extend their business in the Mediterranean,” the statement added. 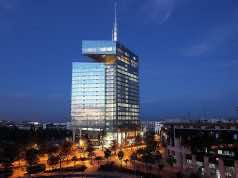