Slaoui thanked Trump for his appointment, saying he is honored to have the privilege of serving “our country” and the world in helping to develop a COVID-19 vaccine.

Trump announced the appointment during a press conference in the White House’s Rose Garden.

In the press briefing, Moncef Slaoui thanked Trump for his appointment, saying he is honored to have the privilege of serving “our country” and the world in helping to develop a vaccine.

“The objectives of Operation Warp Speed are very clear,” Slaoui said, adding that they are “very credible” but “extremely challenging.”

The Moroccan expert explained that with the help and the support of government institutions, including the US army, the objectives are “doable.”

“I have recently seen early data from clinical trials with coronavirus vaccines. This data made me feel even more confident that we will be able to deliver a few hundred million doses of a vaccine by the end of 2020,” Slaoui said.

He said the team will strive to achieve the operation’s objectives.

Slaoui also promised that the team will be optimizing and developing medicines to benefit those who have already contracted the virus. “This will be our focus for 24/7” in the coming months, he said.

As Trump unveiled Operation Warp Speed, the president expressed satisfaction with the progress the US has made in battling COVID-19.

Trump said the objective of Operation Warp Speed is to finish developing, manufacturing, and distributing an effective vaccine for the novel coronavirus.

He expressed hope for the team to find a cure for the virus before the end of the year, adding that the US is working with several countries and “great scientists” to develop a vaccine.

Slaoui earned a Ph.D. in molecular biology and immunology from the Free University of Brussels, Belgium, and completed his postdoctoral studies at Harvard Medical School and Tufts University School of Medicine, Boston.

The Moroccan expert was the former head of the vaccines division at GlaxoSmithKline (GSK), a multinational pharmaceutical company based in London, where he oversaw the development of vaccines protecting against gastroenteritis in infants (Rotarix), pneumococcal disease (Synflorix), and cervical cancer (Cervarix).

In 2015 he won European approval for the world’s first malaria vaccine (Mosquirix). When he retired from GSK in 2017, the drugmaker had a vaccine for Ebola in development. 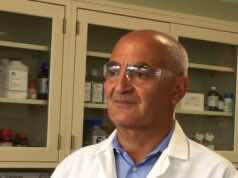