Rabat – The Japanese House of Councillors adopted on May 13 an agreement on the protection and promotion of investments between Morocco and Japan.

The agreement was signed on January 8, at the headquarters of the Ministry of Foreign Affairs in Rabat on the occasion of the fifth session of the Morocco-Japan Joint Commission.

Moroccan Minister Delegate to the Minister of Foreign Affairs, African Cooperation, and Moroccans Residing Abroad, Mohcine Jazouli, and Japanese Minister of State for Foreign Affairs Keisuke Suziki signed the agreement in the presence of Takuji Hanatani, the Japanese Ambassador to Morocco, Moroccan Ambassador to Japan Rachad Bouhlal, and other ministry officials from both countries.

The agreement comes in the form of three partnerships between the two countries.

The first accord touches on the promotion and protection of investment and aims to create advantageous conditions for investments in both countries, as well as to promote economic and bilateral relations.

The second aims to avoid double taxation and to prevent tax evasion and fraud. The accord applies to persons residing in both countries.

The Japanese private sector in Morocco counts 72 companies that operate in the automotive, energy, chemicals, banking, and logistics industries, said a statement from the Moroccan Embassy in Tokyo.

The number of Japanese companies in Morocco has nearly doubled over the last three years, which reflects Japan’s increasing interest in the North African country, “as a leading industrial platform in Africa,” said the statement.

During a visit of Japanese Vice-Minister for Foreign Affairs Nakatani Shinichi to Rabat on February 17, Jazouli said that Japan could become Morocco’s main trade partner in Asia.

He said that the presence of Japanese companies in the North African country boosts business cooperation between Japan and Morocco. The companies employ more than 40,000 Moroccans.

The European Bank for Reconstruction and Development (EBRD) predicted that Moroccan GDP will shrink by 2% in 2020. The bank linked this to the recession in Europe and lower commodity prices, which makes the Moroccan-Japanese agreement a possible lifeline to help boost Morocco’s economy after the COVID-19 crisis. 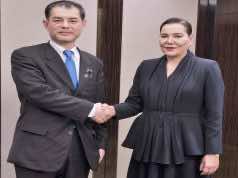 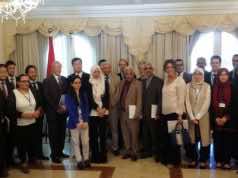 Japanese Ambassador Congratulates 14 Moroccans with Scholarships to Study in Japan