For several centuries, the 1,160-year-old mosque was a destination for knowledge-seekers from across the Maghreb.

Most people interested in Islamic and Moroccan histories have heard of Al-Qarawiyyin Mosque in Fez, one of the oldest mosques in the Maghreb and home to the oldest continually-operating university in the world. However, the glory of Al-Qarawiyyin may have cast a shadow over Al-Andalus Mosque, a building also of great importance in the history of Fez, Morocco’s oldest imperial city.

The story of Al-Andalus Mosque dates back to the 9th century when Fez was still a young city establishing its foundations. Built in the year 860, only one year after the completion of Al-Qarawiyyin’s foundation, Al-Andalus Mosque is one of the oldest mosques in Morocco and North Africa.

The histories of Al-Andalus and Al-Qarawiyyin mosques are so entwined that the two monuments share the same blood. While Al-Qarawiyyin was built by historical figure Fatima al-Fihriya, her sister Maryam al-Fihriya built Al-Andalus.

The two sisters, originally from Kairouan, in modern-day Tunisia, inherited a fortune after their father Muhammad al-Fihri, a successful merchant in Fez, passed away. To promote the teaching of Fiqh (Islamic jurisprudence) and Hadith (teachings of Prophet Muhammad), which they had extensively studied, the sisters decided to invest their new fortune into building mosques that would also serve as spaces to exchange knowledge.

Al-Andalus Mosque takes its name from the Andalusian refugees who fled Cordoba, in modern-day Spain, after their rebellion against the Umayyads ruling the Andalusian city. In the year 818, Fez welcomed approximately 800 Andalusian families who both helped to build the mosque and used it as a place of worship after its completion.

Through its more than 1,000 years of existence, Al-Andalus Mosque underwent a series of renovations and upgrades. The original construction was modest: It consisted of arcades with seven vaults, two libraries, and a small Sahn, or courtyard, in the middle. Several trees were planted in the mosque’s courtyard, which had access to abundant water through a channel.

A few years after its initial completion, the Andalusian migrants built a minaret for the mosque. The square-shaped minaret has simple decorations on its frame and was built to resemble the minaret of Al-Qarawiyyin Mosque. Today, the minaret is one of the few parts of the mosque that remain unaltered from their original construction.

Approximately 100 years after it was built, Al-Andalus Mosque gained importance in Fez after the city’s governor at the time, Obaidullah, made it the city’s site for khutbah, the religious sermon given during the Friday prayer. At the time, the khutbah was not only a religious speech, but had political and social dimensions. It served to unite the people and bring their attention to current issues.

Before Al-Andalus Mosque became a destination for Friday prayers, the khutbah used to be given in Al-Ashyakh Mosque, the first mosque ever built in Fez. The decision to move the khutbah to Al-Andalus was mainly due to the growing population of Fez and the relatively small size of the old mosque.

During the Almohad Dynasty (1147-1248), Al-Andalus Mosque saw the construction of a large gate that overlooks its northern facade. The gate, built between 1203 and 1207 under the orders of the fourth Almohad caliph, Muhammad al-Nasir, is topped by two domes. One dome is made of carved plasters, while the second is built of cedarwood. The gate was also ornamented with a combination of wooden zellige, a form of mosaic tile work, and Persian Qashani decorations.

Under Al-Nasir’s rule, the mosque underwent a complete overhaul. The caliph ordered a series of renovations including the replacement of old stone-made pillars with new ones made of bricks. Only the minaret remained as it was.

During the Marinid Dynasty (1248-1465), a period known as the Golden Age of Fez, Al-Andalus Mosque became a branch of Al-Qarawiyyin University and served as a school to teach the Maliki school of Fiqh.

Between the 13th and the 14th centuries, new schools appeared in the surrounding space, such as the Sahrij Madrasa, which was built to accommodate students who came from distant places to study at Al-Andalus, or the Sab’in Madrasa, which was dedicated to teaching the seven different styles of Quran recitation.

Al-Andalus Mosque remained a destination for knowledge-seekers for several centuries. The landmark gained more significance as a place of education during the Saadi Dynasty (1549-1659). However, it did not undergo any renovations because of the Saadis’ focus on military strength to prevent foreign invasions.

The next wave of renovations waited until the Alaouite dynasty, which started in 1666. The mosque’s rooftops, which had sustained much damage since the 13th century, were completely refurbished.

Moulay Ismail, who ruled between 1672-1727, ordered the addition of new decorations and architectural works to Al-Andalus Mosque, including a fountain in the building’s northern facade and an apartment made of stones for the mosque’s imams (prayer leaders) on the second floor. The mosque’s new decorations included mosaics in the courtyard, colorful glass windows, and a bronze chandelier with engraved ornaments.

In addition to its religious and academic roles, Al-Andalus Mosque was home to a set of artifacts that represent the artistic creativity of the Islamic civilization. Dar Batha Museum of Fez currently hosts the majority of the artworks, but many have previously appeared in exhibitions across the world. Museums that exhibited the artifacts include the Arab World Institute in France, the Sao Paulo Museum in Brazil, and the National Museum of World Cultures in the Netherlands.

One of the most impressive artifacts in Al-Andalus Mosque is the mosque’s Minbar, the pulpit where the imam stands to give khutbah. The Minbar, sculpted in 925, is the second oldest Minbar in the Maghreb region, after that of the Great Mosque of Kairouan, the oldest mosque in Africa.

The Minbar was used for over 1,000 years, from its creation until 1934. The sculpted cedar structure consisted of several steps on which the imam would stand. The Minbar’s side walls were created in 979, while its back was made in 985. Woodwork is one of the most widespread crafts in Fez, mainly due to the cedar forests surrounding the city, and Al-Andalus Mosque’s Minbar is a fine example of Fassi carpentry’s quality.

The wooden artifact merges Oriental, African, and Andalusian styles. The Minbar’s side walls were mainly influenced by Egyptian woodwork, with Kufic calligraphy carved in the wood. Meanwhile, the decorative carvings had Abbasid influences and greatly resemble plaster and wood decorations from Samarra in modern-day Iraq, the capital of the Abbasid caliphate between 836 and 892.

The internal carvings illustrated vegetation, including palms and coniferous trees, reminiscent of African artifacts that draw inspiration from nature. Finally, the Minbar’s back contained decorations based on symmetric geometric shapes, similar to the ones found decorating Andalusian palaces and mosques.

The cedar wood Minbar was decorated with carvings in various styles.
1 of 4

Despite being in the shadow of Al-Qarawiyyin Mosque in recent centuries, Al-Andalus Mosque has never lost its value. While it has forfeited its academic role in the last century to modern universities and schools, the mosque continues to fulfill its religious and spiritual role, a role that it has successfully maintained for more than one millennium. 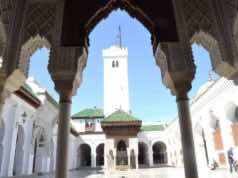