Several eyewitnesses from the southern provinces of Morocco observed a luminous streak of yellow coloring going to red when a meteorite fell in June 2019.

Rabat – The American planetary science organization “Meteoritical Society” (MetSoc) has declared the landing of two meteorites, which Moroccans observed last year. A Moroccan team of researchers at the Hassan II University in Casablanca carried out the successful missions of tracking the two meteorites that fell in southern Morocco.

Researchers from GAIA laboratory at the Hassan II University first recorded the two meteorites, named “Wad Lahteyba” and “Al Farciya,” in 2019 in the province of Assa-Zag in the southern region of Guelmim-Oued Noun.

The discovery of meteorite pieces is the fruit of a partnership between the Casablanca university, Moroccan meteorite hunters, the Moroccan Association of Meteorites, Attarik Foundation for Meteoritics and the American Institute of Meteoritics at the University of New Mexico in the US.

According to a press release from Hassan II University, several eyewitnesses from the southern provinces of Morocco observed a luminous streak of yellow coloring going to red for a few seconds on June 27, 2019, at 5:00 p.m. The Meteoritical Society published its declaration of the meteorites on May 9, 2020.

The two celestial bodies crossed the sky from the southwest to the northeast, without making any explosion. Two days later, Moroccan meteorite hunters found the first piece of the meteorites.

Two months later, on August 20, another meteor was seen at 1:15 a.m. by several residents of the Lamhbas region. Locals described it as a red fireball crossing the sky from north to south, followed by two explosions.

Once again, meteorite hunters went looking for the body, despite the heat of August, and collected a few pieces.

Meteorite hunter H. El Harbi and the Moroccan Association of Meteorites provided the GAIA laboratory’s study with meteorite samples, and contacts of the eyewitnesses.

Thanks to Moroccan hunters’ data, the two meteorite falls are now registered by the MetSoc, the only entity that validates meteorite classifications in the world.

Professor Hasnaa Chennaoui and her Ph.D. student, Fatima Ezzahra Jadid, from the GAIA laboratory carried out the petrographic and the mineralogical description of the samples.

Meanwhile, Professor Carl Agee from the University of New Mexico carried out a geochemical analysis of the minerals by “electron microprobe.” Agee is world-renowned in the study of extraterrestrial matter.

Research helped classify the two observed falls. The June 27, 2019, fall is an ordinary Chondrite type H5, with an estimated mass of 20 kilograms, and took the name of “Wad Lahteyba.”

The August 20, 2019, fall was classified as an ordinary Chondrite type L6, with an estimated mass of 1.3 kilograms and was given the name “Al Farciya.” The two names are references to the places of the fall.

The two meteorite falls bring the total of observed Moroccan falls to 20. Professor Chennaoui has studied 14 of them since the meteorite of Benguerir on November 22, 2004.

Hassan II University’s statement notes Morocco is among the most-organized countries in the world for the declaration of observed meteorite falls. 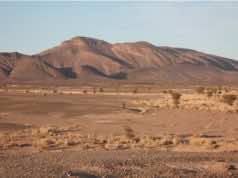