El Yamiq is one of the rare Moroccan players who started their football career locally before earning a contract with a European club.

The 190-centimeter-tall center back is currently on loan to Real Zaragoza in the second division of the Spanish league from Italian club Genoa CFC. El Yamiq’s contract with Genoa remains valid until June 2021.

El Yamiq gained interest from the clubs after his regular appearances with Real Zaragoza pushed the team to the top of the league’s rankings. Real Zaragoza is currently second on the league’s table, a position that allows direct promotion to the first division at the end of the season.

Valencia CF’s interest in the Moroccan defender is not the first of its kind. In January, the club entered into negotiations with Moroccan international Zouhair Feddal, currently playing as a center back for Real Betis.

Born in 1992 in Khouribga, near Casablanca, El Yamiq started his professional football career in 2012 with local club OCK.

Right before his transfer to Italy, El Yamiq was among the Moroccan squad that won the 2018 African Nations Championship and participated in two games.

While his first two years with Genoa were not the best of his career, mainly due to unfamiliarity with the Italian playstyle, El Yamiq’s performance quickly improved after his loan to Zaragoza, earning the young Moroccan the trust of coach Victor Fernandez and a spot among the starting 11 in the majority of the team’s fixtures. 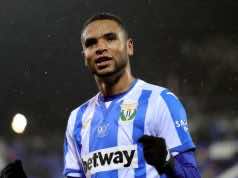 En Nesyri Offers Leganes its First Hat-Trick in its History