“I cannot conclude this message without reminding you that if the regularization is not carried out before the date indicated, your child cannot be re-registered next year.”

Rabat – The Agency for French Education Abroad (AEFE) in Morocco shattered the hopes of many parents of fee reduction for the third quarter of this year, with an official note they sent to students’ families on June 4.

After a three-month battle between students’ parents and the AEFE network of schools in Morocco, Principal of Lyautey High School in Casablanca, Claude Thoinet sent a note to parents telling them that no fee reduction will be applied for the third quarter of this school year.

In accordance with Moroccan legislation and due to the special circumstances of the COVID-19-induced lockdown, all schools in Morocco, including those in the AEFE network, closed in mid-March as a preventive measure against a major outbreak.

The parents’ struggle with financial difficulties and the relatively expensive fees of French schools in Morocco was the motive behind their request for a reduction in required payment.

“I ask you to make the payment as soon as possible because the invoicing of tuition fees for the third quarter will not be changed,” said Thoinet in the letter, addressing the parents of French and Moroccan students alike.

According to Le360, parents requested a discount between 30% to 50% for the last three months’ period. Parents’ hopes were linked to the savings that French schools have made during their closure over this period.

Why not reduce fees?

To back up his decision, the French official said in the same letter that a reduction of 30% would jeopardize the functioning of AEFE network schools in Morocco, although AEFE agreed to grant fee reductions in other countries.

The Lyautey High School principal went on to say full fee payment is necessary for providing workers with better conditions, as well as supporting students who have difficulties in some school subjects during the lockdown. The ultimate aim expressed in the letter is “to preserve the sustainability of [these educational] establishments under direct management.”

While remote learning reduces expenses for the French schools, students are not currently receiving lessons in several subjects such as physical education, music, and art. Providing fewer resources means even more savings for the schools.

Calculating the simple equation led parents to suggest that schools could use these savings to meet their fee reduction expectations, to which Principal Thoinet responded with numbers.

“The savings made by the establishment during these closed months are minimal (around DH 500,000 per month) … and are thus well below what the establishment will devote to [an] assistance system for families in [financial] difficulty.”

The French principal chose to put responsibility for consequences of this debate on parents’ shoulders by linking their contributions to potential harm to the ongoing education of all students, even those whose parents are willing to pay the usual fees.

“Without the contribution of families, it is the future of a system and the education of all children – even those whose parents paid the school fees – that would be weakened,” Thoinet argued.

Anticipating possible abstinence from paying, whether due to financial difficulty or simple refusal, Thoinet finished his letter by threatening parents. “I cannot conclude this message without reminding you that if the regularization is not carried out before the date indicated, your child cannot be re-registered next year.”

The criticism from parents of children studying at Moroccan private schools also comes from the rejection of their fee reduction request.

Their debate follows a letter that the National Federation of Private Education and Vocational Training (FMEFP), the National League of Private Education (AEPM), and the Conference of Grandes Ecoles (CDGE) for Prestigious Higher Education Institutions sent to the head of the government. They called on Saad Eddine El Othmani for financial and administrative aid due to the COVID-19 crisis.

FMEFP, AEPM, and CDGE said the suspension of studies in Morocco, announced on March 13, will force private schools and businesses into bankruptcy.

Social media users then expressed outrage, condemning private schools of being “greedy” and “opportunistic.” “I expected initiatives to help Moroccans not extra-demands from the government,” posted Youssef Belhaissi, a senior journalist at Medi 1 TV channel. 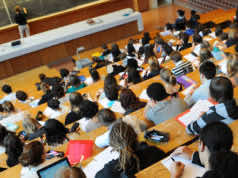 Who Are the Favorite Employers of Moroccan French School Graduates?