Security services uncovered boat engines and an inflatable boat hidden in the desert, along with several hunting rifles.

Rabat –  Police in the southern city of Tan-Tan arrested on June 6 four suspects for their links to an international drug trafficking network. The arrest operation enabled police to seize 1 ton and 223 kilograms of cannabis resin.

Police arrested two suspects in Tan-Tan who were already wanted for their involvement in drug trafficking. The two suspects were in possession of approximately MAD 69,000 ($7,136), “probably the result from [drug trafficking],” a statement for the General Directorate of National Security (DGSN) has said.

Police arrested the two other suspects in the town of El Ouatia, 25 kilometers from Tan-Tan. Investigations helped the police seize an inflatable boat and two engines that the suspects had hidden in the desert. Security services also seized several hunting cartridges as well as a car.

In collaboration with the General Directorate of Territorial Surveillance (DGST), police detained the four suspects, aged between 34 and 38, for further investigation to determine the circumstances of the case.

The latest security operation is part of Morocco’s approach to combat drug trafficking.

In 2019, the police seized 179,657 tons of cannabis and its derivatives, representing an increase of 127 tons compared to the previous year.

In its fight against drug trafficking, Moroccan customs also seized 119 tons of cannabis resin. In addition, authorities seized 63 grams of “hard drugs” and 690,000 psychotropic tablets, such as ecstasy, amphetamines, and Rivotril. 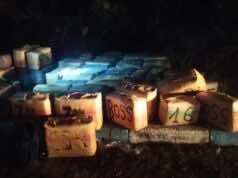