“The constitution guarantees freedom of thought, expression, and assembly, and says the state guarantees every individual the freedom to practice his or her religious affairs.”

Morocco hit international headlines in 2019 with the visit of Pope Francis and loud pledges promoting interfaith dialogue and religious tolerance. But how much religious freedom does the Moroccan state really grant?

The US State Department’s 2019 Report on International Religious Freedom in Morocco, a document that analyzes the constitutional rights to religious freedom and how this translates in practice, came to mixed conclusions.

Article 3 of Morocco’s 2011 constitution states: “Islam is the religion of the state, which guarantees all the free exercise of beliefs.” The wording of this clause is particular to Morocco’s legal framework, in that the majority of Arab or Muslim states specify Islam as a foundation for legislation.

Meanwhile, the preamble to the constitution emphasizes that Morocco’s “unity, is forged by the convergence of its Arab-Islamist, Berber [Amazigh] and Saharan-Hassanic [Saharo-Hassanie] components, nourished and enriched by its African, Andalusian, Hebraic and Mediterranean influences.”

This excerpt clearly spotlights the multi-dimensional and multi-cultural nature of the population, including, through references to Judaism, in a religious sense.

Furthermore, the constitution specifies that: “The preeminence accorded to the Muslim religion in the national reference is consistent with the attachment of the Moroccan people to the values of openness, of moderation, of tolerance, and of dialogue for mutual understanding between all the cultures and the civilizations of the world.”

The 2011 legislative text also specifies Morocco’s adherence to internationally recognized human rights law, as well as its commitment to combating all forms of discrimination, including religious discrimination or prejudice.

The recently-released US State Department report cites Article 25 of the Moroccan constitution, a clause that guarantees freedom of thought, expression, and opinion. The State Department’s analysis interprets this clause as covering freedom of belief.

The State Department also cites King Mohammed VI’s status as “commander of the faithful,” outlining his responsibility as a guarantor of religious freedom.

Most aspects of the constitution cited in the US State Department report, and closer inspection of all its 180 Articles, project the image of a relatively tolerant, liberal Muslim state where religious freedom is prized, despite the lack of legal recognition of faiths other than Judaism and Islam.

How does this translate into law?

The Penal Code, however, tells a slightly different story. The State Department report notes that Moroccan law prohibits “any individual, including members of parliament normally immune from arrest, from criticizing Islam on public platforms, such as print or online media, or in public speeches.”

The law also criminalizes proselytizing, or actively attempting to undermine the faith of a Muslim. Anyone found guilty of converting or trying to convert a Muslim to another faith risks up to three years behind bars.

The State Department report emphasized that criminalizing proselytizing is a short step from impeding freedom of speech and expression.

Citing American NGO Open Doors’ annual 2019 World Watch List, the report said that criminalizing “shaking the faith” of a Muslim “put many Christians who talked to others about their faith at risk of criminal prosecution and arrest.”

The NGO also noted that the article on conversion in the Penal Code not only “only punish[ed] proselytization, converts to Christianity [could] be punished in other ways, such as loss of inheritance rights and custody of their children.”

However, the law also criminalizes “impeding or preventing one or more persons from worshiping or from attending worship services of any religion,” the State Department notes.

The State Department also draws attention to family law and marriage: “According to the law, a Muslim man may marry a Christian or Jewish woman; a Muslim woman may not marry a man of another religion unless he converts to Islam.”

While this law is common practice in Muslim countries, the US State Department wants to encourage more flexibility in marital law, particularly in terms of recognizing marriages and legal family matters outside Islam.

Under Moroccan law, “Sunni Muslims and Jews are the only religious groups recognized in the constitution as native to the country,” the report explains.

The State Department urged the Moroccan “government to recognize the existence of all of its religious minority communities as well as to establish a legal framework for non-Muslim or Jewish citizens to address personal legal status matters, including marriage.”

So, is Morocco a religiously tolerant country or not?

In March 2019, Pope Francis II visited Morocco, sending waves of optimism about the future of interfaith dialogue and tolerance throughout Morocco and the world. Morocco’s King Mohammed VI added fuel to the fire with a rousing speech about Morocco’s diversity and the rich spiritual history.

The complex nature of Morocco’s spiritual past, he said, “is reflected by the mosques, churches, and synagogues which have coexisted in the cities of the Kingdom since time immemorial.”

In his speech, King Mohammed advocated passionately for coexistence and strong interfaith dialogue and cooperation, particularly between the three Abrahamic faiths.

Then, in July of the same year, the UN adopted a resolution on interfaith dialogue and counter-terrorism that Morocco played a key part in drafting.

Morocco’s state-owned media outlet, Maghreb Arab Press (MAP), wrote: “The general consensus over this resolution and its backing by 90 countries from different regions of the world and with different cultural and religious sensibilities is a testimony to Morocco’s credibility on the world scene as a promoter of [religious] dialogue and tolerance.”

On the surface, at least, Morocco appears to be walking the walk when it comes to religious tolerance, despite concerns spotlighted by the US State Department regarding a lack of developments on the topic.

The report noted progress on the situation of Shia Muslims in Morocco: “There were no reports from Shia citizens that security forces detained and questioned Shia citizens about their beliefs. In contrast to previous years, the MOE reported it granted the only two exemptions from mandatory Islamic education requested during the year.”

The State Department also shone the spotlight on laws concerning Ramadan, commenting on treatment of people perceived to be flouting the month-long fast.

The report states that a number of youths faced arrest for smoking before sunset but were released after paying fines.

In some areas, progress is an ongoing process. Morocco is making tangible steps towards religious tolerance and equality, within the cultural and societal framework built by its own history and relationship with Islam.

As Morocco’s former Secretary of State of the Ministry of Foreign Affairs and International Cooperation, Mounia Boucetta, said in October, “Moroccans have made an irreversible choice to uphold and practice the values of tolerance, coexistence, and peace, a choice that honors the legacy of our past but most importantly it is the only choice we have to ensure a stable and prosperous future for our country.”

The pledges have been made and the intent is clear; the next few years, however, will be key in building, and maintaining, the level of religious freedom and coexistence laid out by Morocco’s leadership. 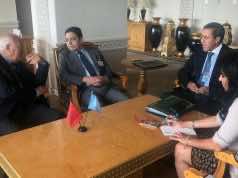