UNHCR’s latest report identifies a staggering number of forcibly displaced people and concludes that displacement is “no longer a short-term and temporary phenomenon.”

Rabat – The United Nations High Commissioner for Refugees (UNHCR)’s latest global trends report highlights the unprecedented number of registered displaced people in the world as of December 2019. The total has reached nearly 80 million.

The alarming count almost doubled the number of people in crisis a decade ago. Stemming from persecution, violence, conflict, human rights violations, or disturbing public order, the UN’s current figures indicate that one in every 97 people on the planet are victims of displacement.

“This almost 80 million figure – the highest that UNHCR has recorded since these statistics have been systematically collected, is of course a reason for great concern. This is approximately one per cent of the world’s population, we have never reached this very significant percentage,” UNHCR High Commissioner, Filippo Grandi said.

In 2019 alone, 8.7 million people were newly displaced. According to the latest report, while the number of displaced people grows, the amount of people able to rebuild their lives, resettle, or return home has taken a significant dip since the late 1990’s and early 2000’s.

At its peak between1990 and 2000, approximately 15.3 million refugees and internally displaced people were able to return to their home country, compared to the 9.6 million displaced people in the following decade, and the even fewer 3.9 million returnees between 2010 and 2019.

“We are witnessing a changed reality in that forced displacement nowadays is not only vastly more widespread but is simply no longer a short-term and temporary phenomenon,” reports Grandi.

The High Commissioner criticized recent rhetoric suggesting that rich countries bear the burden of hosting those forced from their home. “This continues to be a global issue, an issue for all States, but one that challenges most directly the poorer countries – not the richer countries – in spite of the rhetoric,” he said.

Data shows that poorer countries, especially those neighboring countries with conflict, have hosted 85% of those forced from their homes.

In terms of those affected by displacement, 26 million people are identified as refugees, plus 5.6 Palestinians who fall under special registration with the United Nations Relief and Works Agency for Palestine Refugees in the Near East (UNRWA). Additionally, 20.4 million people are categorized under the UNHCR’s mandate.

Approximately 30 to 34 million of the total 79.5 million forcibly displaced peoples are children.

UNHCR predicts that the COVID-19 pandemic will worsen the plight of people living under such challenging circumstances and increase population movement in years to come. 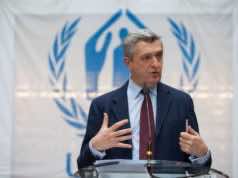