Rabat – The Moroccan and Italian parliaments have pledged further cooperation between the legislative institutions and politicians in the two countries.

Ambassador of Morocco in Italy Youssef Balla met with the president of Deputies of Italy Roberto Fico on June 23 to discuss means to boost cooperation.

The two parties emphasized the need to “revitalize the legal framework of parliamentary relations to fully fulfill its role” as a pillar of the multidimensional strategic partnership representatives the two countries signed in Rabat on November 1, 2019.

The partnership also aims to find settlements for regional disputes and conflicts, ensuring cooperation between Africa and the Mediterranean.

In addition, the partnership is intended to reinforce dialogue and cooperation between the two countries in counterterrorism and in the fight against international crime and irregular migration.

Italy and Morocco maintain friendly diplomatic relations. Di Mai said during the November signing of the partnership that the North African country is a “partner sought by several Mediterranean countries and elsewhere.”

The two countries already have business bonds through trade partnerships.

Exports between Italy and Morocco recorded a value of more than €1.4 billion in the first half of 2019.

Italian imports from Morocco include cars, with 34.2 % of total imports, fisheries20.0%, and vehicles accessories and engines (14.5%). 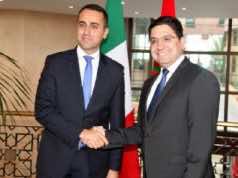