The journalist was arrested in 2017 during the Hirak Rif protests and was charged for “not denouncing a crime that threatens the state’s safety.”

Rabat – The administration of the Tiflet 2 local prison, 60 kilometers east of Rabat, has denied the allegations about discriminatory practices against detained journalist Hamid Mahdaoui.

The prison’s administration issued a statement on Thursday, June 25, after Mahdaoui’s wife, Bouchra Khounchafi, made a Facebook post alleging discrimination against her husband regarding “conditions of using the telephone” and “privation from medical examinations.”

According to the official statement, the allegations that Mahdaoui “uses the same telephone as other inmates, which threatens his health,” are “baseless.”

The detained journalist individually uses a telephone located in a room near his cell, while other inmates in the same block use a different telephone in another room. The latter is disinfected after every use, the statement said.

As for the allegations regarding Mahdaoui’s privation from medical examinations, the prison administration explained that correctional officers had taken all the necessary measures to transfer the inmate to a hospital in Rabat.

However, Mahdaoui refused to wear the reglementary uniform required for transferring prisoners to public hospitals, as mentioned in the laws regulating Moroccan prisons, the statement said.

Prison administrators attempted to convince Mahdaoui to wear the uniform, but he maintained his position, which prevented his transfer to the public hospital, the statement concluded.

Mahdaoui, the founder and editor-in-chief of the online news website Badil.info, was arrested in 2017 during the Hirak Rif protest movement.

In September 2019, a court of appeal confirmed the sentence, leading the journalist to begin a hunger strike in protest of the decision.

Mahdaoui has less than one more month behind bars before finishing his prison sentence. According to his website Badil.info, Mahdaoui should leave prison on Tuesday, July 21. 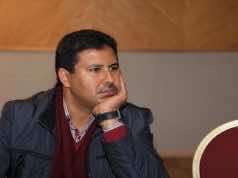