Boeing is proud after signing a contract with Morocco to supply the country with two dozen of the “world’s most advanced multi-role combat helicopters.”

Rabat – Morocco is set to acquire 24 of Boeing’s latest configuration attack helicopters. Following a recently signed contract, the country will be the 17th state in the world to own the latest Boeing AH-64E Apache.

“This is another step forward in our long partnership with the Kingdom of Morocco,” said Jeff Shockey, vice president, Global Sales and Marketing, Boeing Defense, Space & Security and Government Services.

Shockey added, “Worldwide demand for the Apache is growing and we are proud to provide this best-in-class capability to Morocco.”

Currently, there are 16 other countries in possession of the specialized military aircraft. The Boeing website includes the US, the Netherlands, Greece, the United Kingdom, Japan, India, Singapore, Egypt, Qatar, the UAE, Kuwait, South Korea, Israel, Indonesia, and Saudi Arabia. In total, Boeing has delivered nearly 2,500 Apache helicopters.

Under a contract with the US government’s Foreign Military Sales process, Boeing is expected to produce and begin delivering the new Moroccan Apaches by 2024.

According to the Boeing website, “the AH-64E Apache stands as the world’s most advanced multi-role combat helicopter.” It is equipped with updated multi-environment radar targets and advanced navigation capabilities, the latest helicopter design features communications, navigation, sensor, and weapon systems.

In a recent Boeing press release, the company highlighted its partnership with Morocco saying, “The company is committed to developing Morocco’s supply chain and future workforce.”

“In 2016, the company signed a Memorandum of Understanding with the Kingdom to create an ecosystem of aircraft equipment suppliers.”

Earlier this year, Morocco advanced on its five-year plan to reach “regional supremacy” by modernizing its military equipment by concluding 400 million Euro agreements with French arms makers. In 2019, Morocco outranked Saudia Arabia in arms acquisition purchases, racking up a bill of $10.3 million. 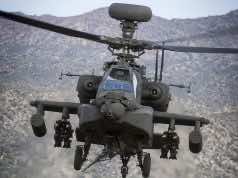 Morocco to Purchase New Apache Attack Helicopters from the US