“I love this character, but persons of color should play characters of color. Therefore, I will be stepping down from the role.”

Rabat – Producers of the animated series “The Simpsons” announced on Friday their decision to stop casting white actors to voice non-white characters.

“Moving forward, The Simpsons will no longer have white actors voice non-white characters,” Fox spokesperson Les Eisner said in a statement on June 26.

White actors have voiced non-white characters in the Simpsons throughout the last three decades, including Harry Shearer as Dr. Julius Hibbert and Hank Azaria as Apu Nahasapeemapetilon, as well as others.

The decision follows a global upsurge in support to fight racism and discrimination under the umbrella of the Black Lives Matter movement, following the brutal murder of an unarmed black man, George Floyd, at the hands of a white Minneapolis police officer.

Azaria, who had been voicing an Indian-American character for 30 years, wrote on Instagram, “I am extremely pleased that The Simpsons characters of Carl, Lou Julio and Bumblebee Man will be recast. I recognize that by voicing these characters, I have taken roles away from people of color and and in doing so, have been part of the problem.”

The actor also said that the decision was mutual. “We all feel like it’s the right thing and good about it,” /Film quoted Azaria as saying.

Influenced by the initiative, voice actor Mike Henry, who voices Cleveland Brown, a Black character from the animated show “Family Guy,” decided to step down from the role. He explained the move in a tweet on Friday.

“It’s been an honor to play Cleveland on Family Guy for 20 years. I love this character, but persons of color should play characters of color. Therefore, I will be stepping down from the role.”

The moves follow a similar decision by the American streaming platform Netflix. The company took the same measure on its animated show “Big Mouth” and Apple TV+ also did so for “Central Park.” 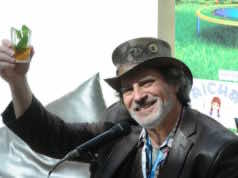