During a virtual meeting attended by UN representatives, academics, and politicians from around the world, the ambassador stressed Morocco’s opposition to Israel’s unilateral measures and plans to annex the occupied territories.

Supporting the meeting’s focus, “with peace, against occupation,” Hamzaoui noted that Israel’s plans to annex parts of the West Bank undermine all efforts to restore justice and peace. He also mentioned Israel’s clear violation of international law and that annexation would dissolve the possibility of a two-state solution, a solution that is internationally supported.

The Moroccan diplomat honed in on Morocco’s “total attachment” to peace and declared that the use of dialogue remains the only viable solution to resolve the Palestinian-Israeli conflict and allow the Palestinian people to fulfill their right to establish a sovereign nation.

Hamzaoui went on to announce Morocco’s call for intensified efforts from international stakeholders and peaceful forces to protect Palestinian people’s rights and to denounce illegal Israeli practices. He urged the global community to support building a constructive peace dynamic for all peoples in the region.

Talaa Saoud Atlassi, president of the International Committee for the Support of the Palestinian People, highlighted the parallels between the Israeli-Palestinian conflict and the Western Sahara question. He affirmed that the components and forces of each situation weigh equal in terms of a need for territorial integrity.

Read also: Spread of COVID-19 May Wreak Havoc on Palestine

Organized by the Office of the Chief Justice of Palestine in partnership with the Palestinian Ministry of Waqf and Religious Affairs, the conference comes as a response to Israel’s Prime Minister, Benjamin Netanyahu’s US backed-pledge to annex the West Bank beginning July 1.

Many political leaders and rights advocates have warned Israel that annexing the West Bank would not only violate Palestinian rights and international law, it could also cause massive conflict in the region.

Last month, Morocco’s Minister of Foreign Affairs, Nasser Bourita, delivered a speech during a meeting with the executive committee of the Organization of Islamic Cooperation (OIC) to restate the country’s support for the Palestinian cause. 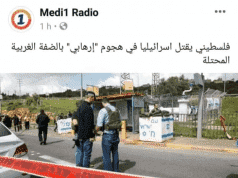