A 2007 report from the European Anti-Fraud Office revealed that Polisario and Algeria divert humanitarian aid destined for the Tindouf camps.

Rabat – The Taxpayers’ Association of Europe—a federation of 29 national taxpayers’ associations—has urged the European Commission to respond to Algeria and the Polisario’s ongoing embezzlement of humanitarian aid destined for the Tindouf camps.

In an interview with London-based news outlet EUToday, the director of the association’s Brussels’ office, Walter Grupp, condemned European official institutions for not clamping down on the fraudulent practices.

The Tindouf camps, in southwestern Algeria, are under the control of the breakaway group, the Polisario Front. Sahrawis living in the camps have long denounced the lack of access to necessities.

The European Union (EU), as well as other international organizations, regularly send humanitarian aid to the camps. However, a 2007 report from the European Anti-Fraud Office (OLAF), made public in 2015, revealed a “well-organized, years-long” embezzlement campaign by the Polisario Front.

The report revealed that the Polisario, in collaboration with Algeria, transport some of the humanitarian aid to the south of Algeria and the north of Mauritania to sell.

“It is our duty to help with humanitarian aid, and we are proud to do so,” Grupp told EUToday. “However, there is an expectation our money is administered well… We are not satisfied with the politics, with the lack of transparency, or with the European Commission itself.”

‘EU must solve problem from its roots’

According to the EU’s financial reports, since the start of 2020, the EU allocated €33.8 million for humanitarian aid in North Africa and the European Neighborhood. A significant part of the budget went to the Tindouf camps.

Commenting on a Member of the European Parliament’s (MEP) request to reduce the amount of humanitarian aid to the camps by €10 million, Grupp expressed his disagreement.

According to the Brussels-based lawyer, the goal is not to punish the populations who are the main victims of the embezzlement, but put an end to the fraud.

Grupp urged the European Commission to launch an investigation into the humanitarian aid destined to the Tindouf camps and to clarify which measures, if any, were taken in response to the 2007 OLAF report.

“I and the taxpayers’ association agree… that nothing has been concretized since 2015,” Grupp told EUToday. “We urge the Commission to ensure that the Algerian or Sahrawi individuals incriminated by the OLAF report no longer have access to aid funded by [EU] taxpayers.”

The lawyer also called on the European Commission to re-evaluate and adapt the humanitarian aid to the day-to-day needs of the concerned populations. Finally, Grupp urged the institution to protect the interests and needs of the camp residents because they are “the most vulnerable to any possible irregularity.”

“I believe that somebody at the level of this institution (European Commission) does not take this matter seriously,” he concluded. 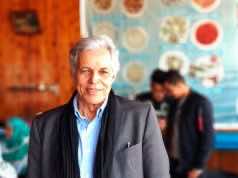